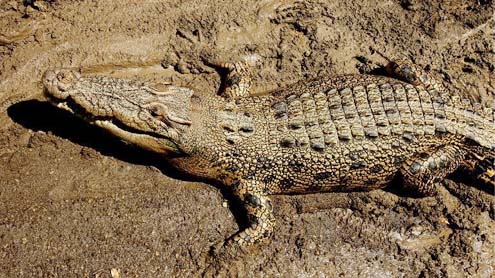 A 24-year-old man was snatched by a crocodile in front of at least 15 onlookers as he swam across a northern Australian river with a friend, police said Sunday.

Northern Territory police said the man was with a group celebrating a birthday at the Mary River Wilderness Retreat, about 110 kilometres (70 miles) from Darwin, on Saturday when he decided to plunge into the water.”They were watching him swim across,” senior sergeant Geoff Bahnert told AFP of the group.”And they just saw a crocodile with him in its jaws.”Police conducted a search for the man, but were unsuccessful. The search was continuing Sunday, Bahnert said, adding that the largest crocodile at the site had been shot and killed as a precaution.

Reports suggested the men had ignored warnings not to swim in the river because of the risk of a crocodile attack.”We tell people to stay away from the water, they obviously went against this (and) a man was taken,” an employee of the resort, Erin Bayard, told News Corp Australia.”We say to everybody it’s full of crocs. It’s one of the most populated rivers in the Territory, every couple of kilometers there is a large croc.”

Saltwater crocodiles, which can grow up to seven metres (23 feet) long and weigh more than a tonne, are a common feature of Australia’s tropical north.They have been protected since the 1970s and their numbers have increased steadily since, along with the number of human encounters.In December, a nine-year-old boy was taken by a four-metre crocodile while swimming in the Northern Territory, one month after a seven-year-old girl went missing while swimming, also in the north. – YahooNews