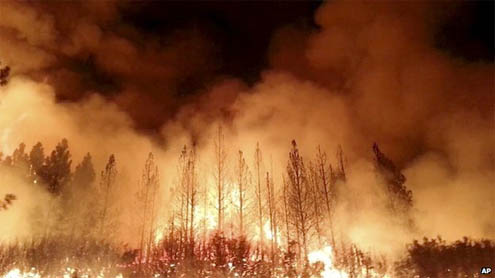 A huge wildfire near Yosemite National Park in California has forced scores of tourists to flee during peak season and is threatening several thousand homes.

The week-old Rim Fire tripled in size on Thursday alone and now spans 84 square miles (217 sq km).More than 1,300 firefighters have been tackling the blaze in difficult terrain but have contained only 2% of it.California’s governor has declared a state of emergency because of the fire, one of 50 burning in the western US.

The blaze has not reached Yosemite itself, which remains open, officials said.But it has shut a stretch of motorway that is one of three entrances to the west side of the park, which receives up to 15,000 visitors a day in the summer.Park spokesman Scott Gediman told the Associated Press news agency that Yosemite Valley was clear of smoke, and all accommodation and attractions were open.

However, the blaze in Stanislaus National Forest, west of Yosemite, has prompted evacuations in the summer community of Pine Mountain Lake, home to nearly 3,000 people, and at least two campgrounds.Meanwhile, five wildfires in Yellowstone National Park have scorched about 18 square miles of mostly remote areas. – BBC