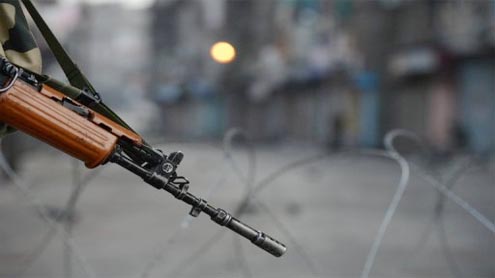 ISLAMABAD: Pakistan accused Indian troops on Wednesday of killing an army officer and seriously wounding a soldier in the latest clash across the disputed border in Kashmir.

The incident was the latest in a series of clashes that began this month which has undermined a push by Pakistan’s new civilian government to improve ties with old rival India.“A Pakistan Army officer Captain Sarfraz embraced shahadat (martyrdom) due to Indian troops’ unprovoked shelling at Shakma sector on line of control,” the ISPR said in a statement.Another soldier was seriously wounded in the firing which began late on Tuesday, the statement said, adding that Pakistani troops had returned fire.

An Indian army official said he had no information about the incident or the casualties reported by Pakistan.The violence came two weeks after the killing of five Indian soldiers along the so-called Line of Control that separates the two sides in the Himalayan region. India said the five were killed by Pakistani forces but Pakistan denied involvement.An Indian army official alleged that Indian troops came under heavy mortar and light-machine gun fire from the Pakistani side on Tuesday night in the Kargil region, where the two sides fought an undeclared war in 1999.

The Kargil region had been peaceful since then until shooting began again last week. “Under intense pressure … we fired back,” the Indian official said.Also on Wednesday, the Foreign Office (FO) summoned the Indian deputy high commissioner to record protest against continuous ceasefire violations by Indian Border Security Forces (BSF) across the Line of Control over the past couple of days.Pakistan called upon India to uphold ceasefire along LoC and reiterated its commitment to the ceasefire agreement of 2003, which it said should be respected in letter and spirit by both sides.

The nuclear-armed rivals have fought three wars since 1947, two of them over Kashmir. Both control a part of the Muslim-majority region but claim it in full.A truce along their Kashmir border has held for nearly a decade even though it has been broken every now and then by tit-for-tat artillery fire and the occasional cross-border ambush.India has faced an insurgency in its part of Kashmir since 1989 and had long accused Pakistan of supporting the militants fighting Indian rule.Pakistan denies arming the militants, saying that it only offers moral support to the Muslim people of Kashmir who are living under what Pakistan criticises as harsh Indian rule. India alleges that this year it has seen a spike in attempts by militants to infiltrate into its part of Kashmir.

Many analysts expect the trend to continue as the two countries jostle for influence in Afghanistan as a NATO force prepares to withdraw by the end of 2014.Both nations fear the other is trying to install a proxy government in Kabul.Pakistan’s government, elected in a May general election, has tried to be conciliatory over the latest outbreak of border violence.On Monday, Prime Minister Nawaz Sharif, who made better ties with India a theme of his election campaign, said Pakistan and India should be fighting poverty and illiteracy instead of each other. He has also asked for talks with Indian officials.

But with elections approaching in India, many doubt that the government in New Delhi is in a position to make any concessions to Pakistan.Hamid Gul, a former chief of Pakistan’s military intelligence agency, told Reuters Television that Nawaz had been prepared to reach out to India in the hope of mending ties before the spate of clashes put paid to that. “It would’ve meant putting Kashmir on the back burner for the time being. But now all this has happened. And all the lobbies that have been talking about peace between India and Pakistan … have been scuttled,” Gul said. – DailyTimes