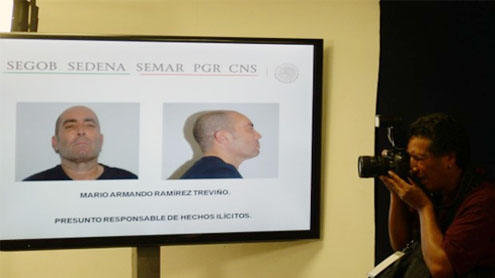 A suspected leader of Mexico’s Gulf Cartel has been arrested near the U.S. border, a Mexican official said Sunday.

Mario Armando Ramirez Trevino was captured Saturday in Reynosa, near Texas, said Eduardo Sanchez, the Mexican government’s security spokesman.Ramirez, also known as X-20, was found with three guns, nine cell phones, and thousands of dollars and pesos in cash, the spokesman said.According to the U.S. State Department, Ramirez is a ranking member of the Gulf Cartel. It had offered a reward of up to $5 million for information leading to his arrest and conviction.

The Gulf Cartel is one of Mexico’s major drug-trafficking organizations. It’s not as powerful as it once was.Last week, authorities said they captured two dozen suspected members of the cartel — including two top lieutenants. In September, they arrested Jorge Eduardo Costilla Sanchez, the then-reputed boss of the powerful Gulf Cartel.

Ramirez’ arrest is the second capture of a major cartel leader in just a few weeks.Authorities nabbed Zetas leader Miguel Angel Trevino Morales, one of Mexico’s most wanted drug lords, last month.His arrest was the most significant blow to drug trafficking in Mexico since President Enrique Pena Nieto took office in December.The Zetas started out as the enforcement arm of Mexico’s Gulf Cartel, but later split off and formed their own drug-trafficking organization. – CNN

Sexual harassment in India: ‘The story you never wanted to hear’