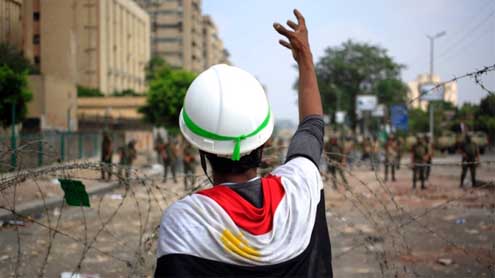 Saudi Arabia said on Monday that Arab and Islamic countries will step in to help Egypt if Western nations cut aid packages to Cairo over its deadly crackdown on Muslim Brotherhood protesters.

“To those who have announced they are cutting their aid to Egypt, or threatening to do that, (we say that) Arab and Muslim nations are rich … and will not hesitate to help Egypt,” Foreign Minister Prince Saud Al-Faisal said.Prince Saud was speaking upon his return from Paris, where he held talks with President Francois Hollande who has strongly condemned the violence in Egypt.Meanwhile, Egypt’s military chief Gen. Abdul Fattah El-Sisi on Monday contacted Crown Prince Salman, deputy premier and minister of defense, by phone and thanked the Kingdom for its unwavering support to safeguard the north African country’s security and stability.

US Sen. John McCain called on Washington to suspend its $1.3 billion in annual aid to Egypt’s military after it overthrew the country’s first democratically elected President Muhammad Mursi on July 3. But some US lawmakers have expressed concern that cutting off aid could endanger Egypt’s 1979 peace treaty with Israel or compromise US privileges concerning the Suez Canal.Foreign ministers of the European Union are to hold emergency talks on Wednesday to review the bloc’s relations with Cairo.

At stake is nearly 5 billion euros ($6.7 billion) in loans and grants promised by the world’s top aid donor to Egypt for 2012-2013. It includes one billion euros from the EU with the rest from European banks the EIB and EBRD.Prince Saud accused countries that slammed Egypt’s crackdown of “believing propaganda” and assuming “hostile positions toward the interests and the stability of Arab and Islamic nations.”

“Let those states that are taking negative stances know that the blaze and destruction will not be confined to Egypt, but will affect all those who supported trouble,” he said.Saudi Arabia and other Gulf countries welcomed Egypt’s ouster of Mursi. Custodian of the Two Holy Mosques King Abdullah was the first leader to send a message of congratulations to caretaker president Adly Mansour, who was appointed shortly after the army deposed Mursi following nationwide protests.

Saudi Arabia later announced an aid package of $5 billion to Egypt. Kuwait and the UAE followed suit, bringing the pledges made by the three GCC states to $12 billion.The king pledged on Friday the Kingdom’s support for Egypt’s fight against “terrorism”, and has ordered the dispatch of three fully-equipped field hospitals to Cairo. – ArabNews