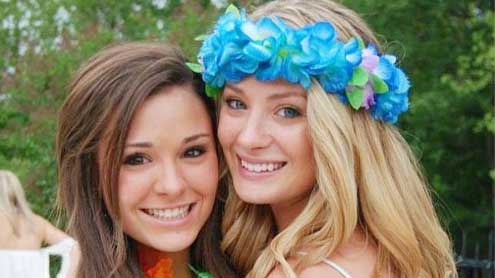 Two cheerleader sisters and their friend who was days away from going off to college have been killed in a tragic car crash.

Kathleen Oliver, 17, and Lauren Oliver, 18 were traveling with Christopher Lenzen in the 18-year-old’s open-topped sports car when it crashed on Homestead Manor Drive in the St Louis suburb of Wildwood at 9:40 p.m. on Thursday.Another friend, Olivia Dames, 18, survived the accident. It’s not yet known whether alcohol played a part in the crash.Investigators are still trying to determine what caused the deadly crash, which involved no other vehicles.

Police said Lenzen drove his 2013 Infiniti G37S convertible off the road and into the side of a house. The car came to a stop in a wooded area behind the home.The two sisters were pronounced dead on the scene, police said, and Lenzen, who was close family friends with actor John Goodman, died a short while later in hospital.’Our hearts are breaking for the families of these young people,’ Kim Cranston, chief communications officer with the Rockwood School District, told The River Front Times.’Today, many people in the Rockwood School District are grieving. These were outstanding young women and a young man, and we are so sorry for the loss of their lives.’

Lauren had graduated Eureka High School last school year, while her sister Kathleen was a senior at the school. Lenzen was a graduate of Marquette High School.Dames, who had attended Eureka with Lauren, took to Twitter to mourn her friends after the terrible crash.’Lucky to be here to spread the joy and love of the three most important people to me,’ she said in her first tweet after the accident.’I love my beautiful angels they truly saved my life.’She also changed her Twitter bio to ‘my three beautiful angels how I love you so.’

In another tweet, she wrote: ‘Lauren & Katherine became angels while holding each other tight. A sight no one can take away from me but something to celebrate.’Lenzen was this week due to head to the University of Missouri at Columbia where he planned to studying business. He was an ‘outstanding athlete’ who played varsity basketball for four years and varsity baseball for three years, according to Cranston.John Goodman attended a bonfire for Lenzen on August 16. ‘He’s a close family friend,’ KSDK reporter Farrah Fazal tweeted. – DailyTimes