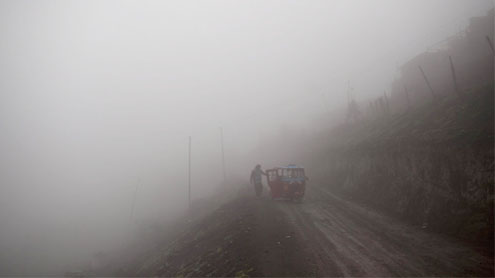 For roughly four months a year, the sun abandons Peru’s seaside desert capital, suffocating it under a ponderous gray cloudbank and fog that coats the city with nighttime drizzles.

The 19th-century writer and seafarer Herman Melville called Lima “the strangest and saddest city thou can’st see.”Other writers have likened its leaden winter sky to “the belly of a burro.”Barometers often read 100 percent humidity, and rheumatoid and bronchial ailments soar in the city of 9 million.Limenos don scarfs and jackets and complain of slipping into a gloom of seasonal depression.

This year, Lima has had a particularly bad bout of winter, its coldest, dampest in 30 years, according to the state meteorological agency, with temperatures dropping to a sodden 12 degrees centigrade (about 54 degrees Fahrenheit).The cold Humboldt current that runs north from Antarctica along the coast is the culprit, colliding with the warmer tropical atmosphere to create the blinding mists called “garua” in coastal Chile and Peru.Of course no one suffers Lima’s winters like the poor huddled in its hilly, fog-draped peripheries.

In one cardboard-and-wood shack, 41-year-old Digna Salvador tells a visiting journalist that it takes her clothing 12 days to dry on the line. Four of her nine children are sick with bronchitis.Her 10-month-old, Marcos, coughs incessantly as she holds him in her arms.Salvador says the highlands province from which she hails, Cajamarca, is much colder in winter.“But everything is sad here,” she says. “In winter, it’s as if we’re living enclosed in a cloud.” – KhaleejNews