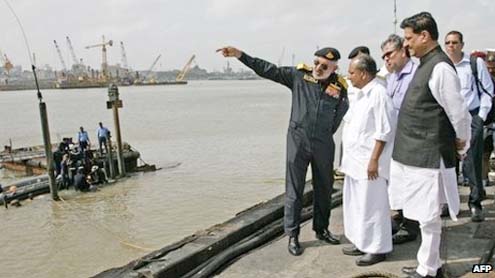 India’s navy has released names of the 18 sailors feared dead inside a submarine which sank after it exploded in a Mumbai dockyard.

Rescuers are yet to reach the sailors who were on board when two huge explosions led to a devastating fire early on Wednesday.The families of the sailors have begun arriving in Mumbai, India’s navy chief has said.The navy chief has warned the country to “prepare for the worst”.A press release issued by the navy names the three officers who were on board the submarine and the 15 crew members.

It is not clear what caused the blasts on the diesel and electricity-powered INS Sindhurakshak. An inquiry is under way and sabotage has not been ruled out, although officials say that looks unlikely at this stage.Divers aboard the submarine have managed to open the main hatch and are draining out water using heavy-duty pumps to help refloat the vessel.Officials have said efforts to reach the sailors have been hampered by poor visibility, restricted space and equipment displaced by the blasts.

The vessel is filled with sea-water and the heat of the explosion also melted parts of the internal hull, deforming the submarine hatches and preventing access to compartments.Some reports in the Indian media said a bigger disaster was averted as the submarine’s twin hulls “contained the fire and reduced losses”.”The twin hulls ensured that the impact did not escape the vessel, but came at the cost of the men on board who most likely did not survive the initial blast,” The Indian Express reported.

The INS Sindhurakshak is one of the 10 Kilo-class submarines bought from Russia between 1986 and 2000. It is equipped with Russian Club-S cruise missile systems.The Russian-built vessel had recently been upgraded at a cost of $80m (£52m) and it may have been armed with missiles and torpedoes. – BBC