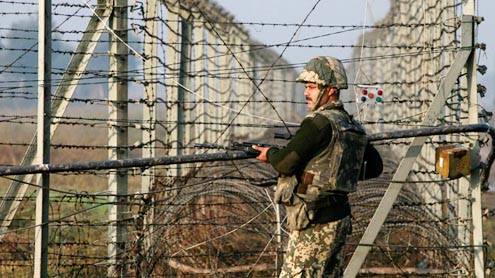 ISLAMABAD/SRINAGAR: Pakistan and India accused each other of provoking violence on their troubled Kashmir frontier on Wednesday as a week of cross-border shelling threatened to derail attempts to resume peace talks between the nuclear-armed rivals.

Tension flared along the de-facto border on August 6 when five Indian soldiers were ambushed and killed in a remote Himalayan district. India blamed the attack on the Pakistan Army. Pakistan denied any involvement.On Wednesday, the Indian army alleged a group of unidentified gunmen had tried to cross into India in the first infiltration attempt from the Pakistani side since the August 6 incident, provoking its servicemen to open fire. Two gunmen were killed.

“The army today foiled an infiltration bid in Keran sector of north Kashmir along the Line of Control with Pakistan and killed two militants,” said Lieutenant Colonel Brijesh Panday, an Indian army commander.There was no immediate comment from the Pakistan Army on the latest Indian accusation, but military sources in Islamabad said one Pakistani civilian was killed earlier in the day in Battal sector as a result of “unprovoked Indian shelling”.“Firing was intense and they (Indians) were using small and heavy arms, including artillery, and targeting civilian populations,” local administration official Malik Ayub Awan told Reuters from Poonch district.

“A shell landed on a house in a small hamlet, namely Kharni in Battal sector… killing a 60-year-old man and injuring his teenaged daughter,” he added. A Pakistani army official on the ground told Reuters, “We did respond to the shelling to silence their guns. But we target only military installations across the Line of Control and not the civilian populations.”Two other incidents were reported elsewhere on the border. The two armies have been exchanging fire recently, straining a ceasefire that has largely held for nearly a decade.

The renewed bitterness has cast doubt over preparations for what both sides see as a potentially breakthrough meeting between Prime Minister Nawaz Sharif and his Indian counterpart Manmohan Singh in New York in September.Separately, India passed a resolution in parliament condemning Pakistan’s “unprovoked attack” on its soldiers in Kashmir last week that left five dead. “It is unfortunate that Pakistan chose to indulge in such unprovoked attacks at a time when efforts were being made to establish a long-lasting framework of peaceful, friendly and co-operative ties…” the resolution passed unanimously by the Indian parliament’s lower house said. – DailyTimes