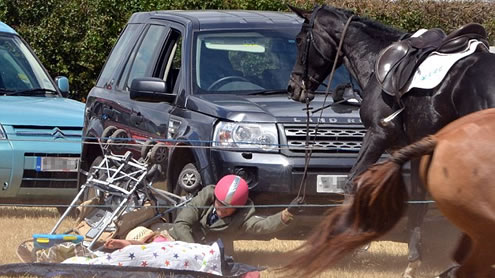 A sleeping toddler was hurled out of her pushchair and narrowly missed being crushed by a runaway horse at a family country fair. As these astonishing pictures show, the horse bolted and threw its rider, who landed next to the child within inches of the horse’s hooves.

The near-tragedy occurred at the Dunster Country Fair in Somerset when an overexcited animal charged into the crowd which included children and pensioners in deckchairs. Gilly Davidson was photographing the event at Dunster Castle near Minehead when she spotted the black horse charging off.

She said: ‘I could see there could be problems when the horse started to go. ‘It bolted towards the perimeter where the spectators were and threw the rider off. She went over its head and onto the bonnet of a parked Land Rover.

‘Then she fell off into a pushchair with a sleeping child in next to the car.

‘The child fell on to the floor while the horse was kicking and rearing just inches away from it.

‘The hooves were just a matter of inches from it.’

No-one was injured in the incident on July 24, which happened during the 35th Dunster Country Fair – a popular event for families. Attractions included a falconry display, hound show, equestrian events and archery. – Dailymail