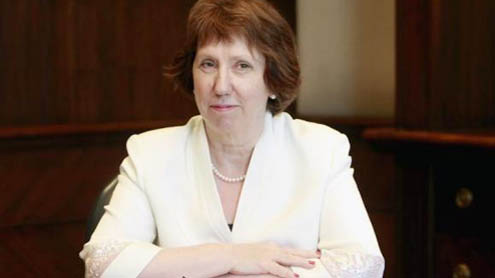 “Mursi is well,” she told reporters, adding that he had access to newspapers and television, and describing their talks as “friendly, open and very frank.”Ashton held two hours of talks with Mursi in the early hours of Tuesday, with sources telling AFP she left Cairo on a military helicopter.She refused to say where Mursi was being held or to characterize his comments to her.“I’m not going to put words in his mouth,” she said.“We had a friendly, open and very frank discussion,” she added. “We talked in-depth.”

Ashton, who arrived Sunday night in Cairo, also met with a range of Egyptian government officials and opposition representatives during her trip, but the visits did not appear to have shifted positions on either side.Speaking alongside Ashton at a separate press conference, vice president for international affairs Mohamed ElBaradei insisted Mursi would not be part of any political process going forward.Ashton’s visit came in the wake of the deaths of 82 people at a pro-Mursi rally in Cairo on Saturday morning.

She has urged an end to the bloodshed and a political transition that would include the Muslim Brotherhood organization from which Mursi hails.But she insisted that she was not in Egypt to push either side to take particular actions or to present an initiative. “I’m not here to ask people to do things,” she said, adding that she would be looking to find “common ground” between the sides.“I don’t come here to say somebody should do this, somebody should do that, this is your country,” she said.

“The solutions are for the Egyptian people.”Mursi’s supporters have insisted he must be reinstated, and reiterated that stance after they met with Ashton on Monday night.But ElBaradei said the ousted leader would not have a role in a future political process, though he called on the Muslim Brotherhood to take part.“Mr. Mursi failed but the Brotherhood continues very much to be part of the political process and we would like them to participate in the political process,” he said.He described Egypt has having entered a “new phase” after the June 30 protests that preceded Mursi’s July 3 coup.“There was a correction of the revolution of the 25th of January,” he said, referring to the 2011 uprising that ousted president Hosni Mubarak. – ArabNews

Pope’s revolution; not all are pleased

Pope's revolution; not all are pleased