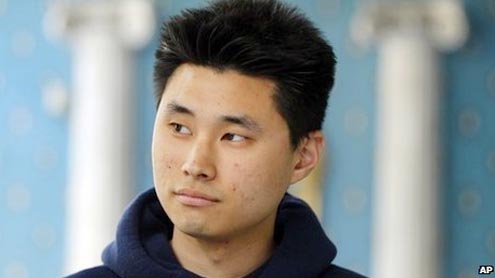 US man 'abandoned' in US jail gets $4m in compensation

A university student in the US city of  San Diego has received more than $4m (£2.6m) from the US government after he was abandoned for more than four days in a prison cell, his lawyer said.

Daniel Chong said he drank his urine to stay alive, tried to carve a message to his mother on his arm and hallucinated.He was held in a drug raid in 2012, but told he would not be charged. Nobody returned to his cell for four days.The justice department’s inspector is investigating what happened.Mr Chong said he slid a shoelace under the door and screamed to get attention before five or six people found him covered in his faeces in the cell at the Drug Enforcement Administration’s San Diego headquarters, the Associated Press reports.

After Mr Chong was rescued, he spent five days in hospital recovering from dehydration, kidney failure, cramps and a perforated oesophagus. He also lost 15lb (7kg).’Horrible accident’Mr Chong was one of nine people detained in the raid. Authorities determined that they would not pursue charges after questioning him.One of Mr Chong’s lawyers said that a police officer then put him in the cell and told him: “We’ll come get you in a minute.”

Mr Chong said he thought he was forgotten by mistake.”It sounded like it was an accident – a really, really bad, horrible accident,” he said.The jail cell had no windows and Mr Chong had no food or water while he was trapped inside.The incident prompted the head of the DEA to issue a public apology last May, saying he was “deeply troubled” by the incident.Mr Chong’s lawyer said that as a result of the incident the Drug Enforcement Administration had introduced new policies for detention, including checking cells daily and installing cameras inside them. – BBC