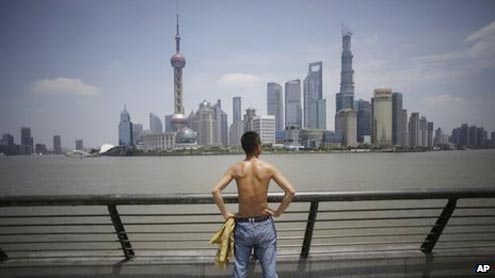 Temperatures in parts of China have hit record highs, prompting an emergency level-two nationwide heat alert for the first time.

In Shanghai, at least 10 people have died from heatstroke, as the city experiences its hottest July in 140 years, reports say.Local journalists have demonstrated the heat by frying meat on the pavement.The national heat alert covers nine provinces, including Anhui, Jiangsu, Hunan, Hubei, Shanghai and Chongqing.According to figures from the Shanghai Meteorological bureau, Shanghai has seen 24 days with temperatures at or above 35C in July.

“It should be a new record since Shanghai had its own weather recording,” said chief service officer Wu Rui.”Also, in July of this year Shanghai reached 40.6 degrees Celsius, it’s highest ever temperature. So the highest temperature in July also broke a record.”More than 10 people in Shanghai have died after suffering from heatstroke, state-run news agency Xinhua said, citing health officials.

In a TV report, journalists from Shanghai TV said they successfully fried a pork chop on a marble slab outdoors in just 10 minutes.The practice appears to have become popular, with photos of slices of bacon and fish being barbecued outdoors by the heat appearing online.The China Meteorological Administration issued the level two emergency heat alert on Tuesday.

“Anhui, Jiangsu, Hunan, Hubei, Zhejiang, Jiangxi, Fujian, Chongqing and Shanghai meteorological bureaus should enter into emergency response on the basis of actual weather conditions,” it said on its website.It added that weather forecasts suggested that some areas south of the Yangtze river, including Chongqing, could experience temperatures of over 35C until 8 August.It urged members of the public to avoid outdoor activities and to take protective measures against the heat.”It’s impossible for people to live without an air-conditioner,” a resident was quoted by Reuters news agency as saying.”Just going outside in this kind of temperate can roast people.” – BBC