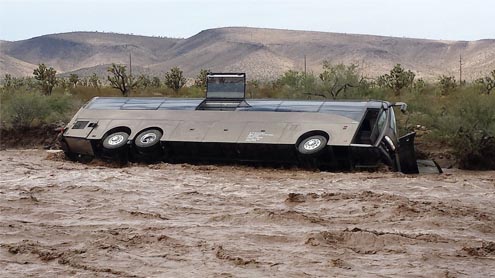 Tour bus flips over in wash amid Ariz rain storm

DOLAN SPRINGS, Ariz: A Las Vegas-bound tour bus carrying 33 people was swept away by Arizona floodwaters as the driver attempted to cross a wash before turning the bus on its side amid heavy rains.

No one was injured. The bus returning on a rural Arizona road from a day-trip to the Grand Canyon’s west rim was pushed down the wash for an estimated 300 yards around 1:50 p.m. near Kingman, said Patrick Moore, chief of the Northern Arizona Consolidated Fire District, which had firefighters at the scene. The crash happened as northern Arizona was hit with a second day of heavy rain.

The area where the bus accident occurred received 0.75 inches of rain in about an hour on Sunday afternoon, said Chris Stumpf, a National Weather Service forecaster in Las Vegas. A flash flood warning was in effect when the accident occurred, he said, and the bus driver shouldn’t have been driving through the area at the time.”It was a really strong storm dumping quite a bit of rain … and it caused flash flooding,” Stumpf said. “They were driving on a portion of the road where they shouldn’t have tried to drive across. They should not have been driving through there.”

Rhonda Ho, operations manager for Canyon Coach Lines, said the bus owned by the Las Vegas-based company was returning from a day-trip to the Grand Canyon’s west rim when driver Joseph Razon saw a car right in front of him go through a section of the highway covered by some water, and “he thought, if a car can go through it, I can go through it.””Then he got slammed by a rushing current of water that came out of nowhere,” she said. “He was driving in almost neck-deep water and trying to control the bus while it was floating.”

After being swept down the flood of water, she said, Razon determined it would be unsafe for the bus to float anymore. He then intentionally tilted the bus against an embankment so it would stop and passengers could escape through its roof. People inside the bus were able to climb out of the driver’s side windows and walked to dry land.”I’m glad the driver kept his cool and everybody got out safely. No one screamed on the bus and everyone kept their cool and that’s amazing,” Ho said.She described Razon as a “very professional driver” with a spotless record. He has worked for the company since 2005.

Kingman is near the Arizona-Nevada stateline and about 100 miles southeast of Las Vegas. The bus passengers and driver returned on another bus to Las Vegas, where Ho was able to speak to the driver.On Sunday evening, as a tow truck was preparing to take away the bus, it was lying on its side and had grass and other debris hanging from it. Two escape hatches on its roof were opened. Writing on the side of the bus said: “C.H. Destination” and “DBA: Canyon Coach Lines”

The passengers were no longer at the scene. The company had sent another bus to pick them up.There were some swift-water rescues of stranded motorists Saturday night after a storm dropped nearly 2 inches of rain in about 90 minutes around Kingman, Stumpf said.The flash flood warning around the accident scene has expired, he said, but there’s a chance for more heavy rain and another similar warning on Monday.The crash happened as Northern Arizona was hit with a second day of heavy rain.The Arizona Department of Transportation closed an 18-mile stretch of Interstate-40 Saturday night between Flagstaff and Kingman because of the flash flooding. – YahooNews