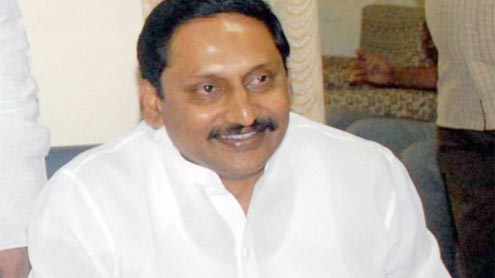 With the Congress leadership veering towards carving out a separate Telangana state, rumours are flying thick and fast that Chief Minister N Kiran Kumar Reddy, strongly opposed to division of the state, has told the party High Command that he would resign if the decision was in favour of bifurcation.

What lends credence to such speculation is that the chief minister had told AICC General-Secretary and in-charge of party affairs in Andhra Pradesh Digvijay Singh that he would not be a party to division of the state. “I will not be party to any destructive decision,” he is reported to have told Singh during a meeting in New Delhi.Congress sources said that Kiran Reddy, on realising that the party High Command was in favour of bifurcation, had insisted that any announcement should be deferred till the completion of the ongoing elections to local bodies in the state.

However, when Singh told him that the decision could not be put on hold any further, the chief minister told him that he would not be party to any destructive decision that would harm the interest of both the state and the Congress. He is reported to have told Congress President Sonia Gandhi the same thing when he met her briefly before returning to Hyderabad.Kiran Reddy, at a meeting with ministers from coastal Andhra and Rayalaseema, reportedly told them not to precipitate the matter by resigning at this stage. The ministers were asked to exercise restraint at least till the party leadership takes the final call on the decades-old issue.

A senior minister said the Seemandhra ministers had discussed the hectic political developments that have unfolded in the past few days. “When we conveyed our decision to resign from the cabinet for the sake of keeping the state united, the chief minister asked us not to take any hasty or extreme step. He asked us to wait till the High Command takes a final decision on the issue as we have already put forward our viewpoints in favour of keeping the state united,” he said. – KhaleejNews