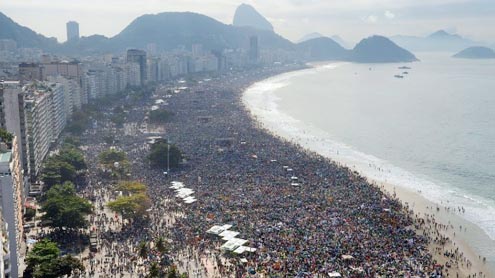 Rio de Janeiro: Pope Francis closed out World Youth Day with a final Mass before a giant crowd on Copacabana beach of millions.

“Go, do not be afraid, and serve,” the Pope told the crowd Sunday. Catholic pilgrims from around the world traveled to Brazil for the weeklong celebration and a chance to see the pontiff, whose visit was a shot in the arm for a church that has seen its share of scandal and troubles.Massive crowds followed Francis at every stop on the trip. Organizers and local officials said 1.5 million people came out for the Way of the Cross observance on Friday. The mayor’s office in Rio said final estimates for a prayer vigil on Saturday could reach up to 3 million. On Sunday, the Vatican citing civil authorizes put the crowd for the final Mass over 3 million.

Helicopter shots showed crowds that stretched shoulder to shoulder for two miles the beach and the streets, where pilgrims had camped out overnight as part of the prayer vigil.As the “popemobile” made its way down Avenue Atlantica for a final time on this trip, the military lined both sides of the street along with volunteers keeping the crowds further back from Pope. Security guards continued to bring infants to the pope to bless and even began lifting disabled persons in wheelchairs up to for a blessing.

During his homily the Pope admonished the crowd to go and share their faith, “the experience of this encounter must not remain locked up in your life or in the small group of your parish, your movement, or your community.””Do not be afraid to go and to bring Christ into every area of life, to the fringes of society, even to those who seem farthest away, most indifferent,” he said.The pope said the message applied all the more to the young people from the Latin America. In Brazil over the past three decades the Catholic Church has slipped significantly, dropping from 90% to 65% of the population who identified as Catholic according to the national census.

Pope Francis has been dubbed the “slum pope” for his consistent focus on the poor and again during the final message to those gathered. “Evangelizing means bearing personal witness to the love of God, it is overcoming our selfishness, it is serving by bending down to wash the feet of our brethren, as Jesus did.”That message he said, “is bringing God’s power to pluck up and break down evil and violence, to destroy and overthrow the barriers of selfishness, intolerance and hatred, so as to build a new world.”

After the pope had concluded his sermon organizers asked for a moment of silence from the giant crowd. During the moment of silence the crashing waves could be heard over the quieted crowd.Just before the start of the Mass began the group participated in a giant flash mob featuring a coordinated dance. Bishops on the stage in their white vestments and pointed miter hats danced along with the throng on the beach to the official World Youth Day song. Organizers said they hoped this would be the largest flash mob in history.

At the conclusion of the service the pope announced, “We have an appointment for the next World Youth Day in 2016 in Krakow, Poland.”Pope John Paul II was the bishop of Krakow. This month, Francis signed off on a second miracle for the long serving and popular pope, allowing the church to declare him a saint. A formal date for the canonization has yet to be announced.The pope concludes his first international trip on Sunday and returns to the Vatican. – CNN