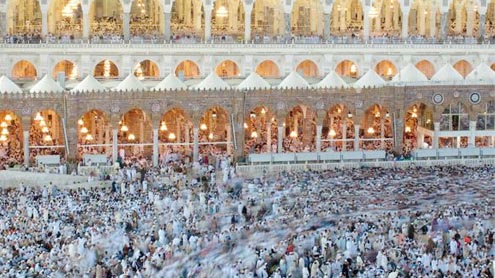 Grand Mufti Sheikh Abdul Aziz Al-Asheikh said the worshipping act of “itikaf” (meditative seclusion) can be observed at any mosque and should not be confined to the Grand Mosque.

Itikaf is a spiritual retreat and Islamic ritual in which a believer secludes his or herself from others to engage solely in acts of worship and keep away from worldly dealings, especially during Ramadan.The large crowds who confine themselves to the Grand Mosque are likely to create difficulties and overcrowding for other worshippers, particularly this year due to expansion works.Al-Asheikh also exhorted Muslims not to wait for the last 10 days of Ramadan to perform Umrah, as that would also create additional crowding at the Grand Mosque.

“The entire city of Makkah is holy; believers may go to other mosques in Makkah for seclusion. There is no need to perform Umrah during the last 10 days of Ramadan, as that was not the practice of the Prophet (peace be upon him),” Al-Asheikh said in a statement.He also urged Umrah pilgrims from nearby towns who frequently visit the Grand Mosque to make their visits less frequent in order to make space and allow pilgrims who have traveled great distances to pray and engage in acts of worship in the Grand Mosque with greater ease.

He reminded fathers of their duties toward their families and children, urging them not to shun these responsibilities.“They should not abandon their duties toward their families; we urge them to take care of their wives and children, while also engaging in nightly prayers and engaging in acts of worship,” the grand mufti said.A spokesman of the Prophet’s Mosque in Madinah, Abdul Wahid Al-Hattab, said the mosque’s administration has made preparations to accommodate 13,000 worshippers in the mosque for seclusion.

“The administration has doubled the facilities for worshippers,” Al-Hattab said. He said the administration even registered applicants online.Worshippers can enter the mosque through Gate 11, Gate 18 and Gate 32, where special arrangements have been made to receive worshippers and record their details, in addition to briefing them on instructions on how to keep the premises clean, he said. – ArabNews