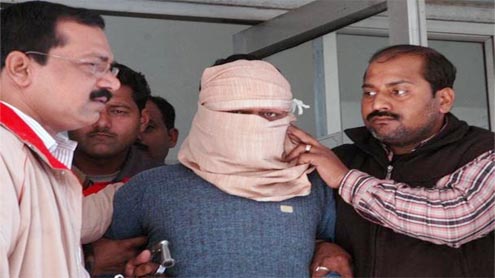 A court in the Indian capital, Delhi, has found a young Muslim man guilty of killing a police inspector in 2008.

Shahzad Ahmad was convicted of killing inspector Mohan Chand Sharma when police raided a building in Delhi’s Batla House area.Police say Ahmad is a militant from the Indian mujahideen group and have accused him of involvement in the 2008 Delhi blasts which killed 26 people.Ahmad’s lawyer says he was not in the apartment at the time of the clash.

Sentencing is due on 29 July.The controversial case is known locally as the Batla House “encounter” case.Two residents of the building were also killed in the 19 September clash, as well as Inspector Sharma.The shootings followed the 13 September serial blasts at busy shopping centres in Delhi.On Thursday, the sessions court in Delhi found Ahmad guilty of murder and attempted murder, as well as obstructing and assaulting public servants.

“He is held guilty of attempting to cause death of Head Constables Balwant Singh and Rajbir Singh and causing death of Inspector MC Sharma by firing on them,” Press Trust of India quoted Additional Sessions Judge Rajender Kumar Shastri as saying.Over the years, questions have been raised by politicians and activists about the case, with many alleging that it was staged.

Although Akhmad’s lawyer has maintained that he was not present in Batla House at the time of the encounter, police say they have “circumstantial evidence” and phone records to prove that he was there.They allege that he escaped after firing at the police.Ahmad was arrested on 1 January 2010 from his village in Azamgarh district in the northern state of Uttar Pradesh. – BBC