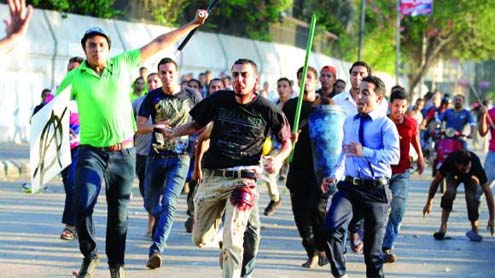 Pressure grew Tuesday on Egypt’s new leaders to release Muhammad Mursi from detention as clashes between supporters and opponents of the deposed president left 11 people dead.

Nine people were killed in Cairo on Tuesday in clashes between opponents and supporters of Mursi, state-run media reported, keeping the most populous Arab nation in turmoil.In separate overnight clashes, a civilian and a policeman were killed in the lawless North Sinai region.The violence broke out before dawn near a Brotherhood protest at Cairo University, where Mursi supporters have been camped out since the army removed him from power on July 3 following protests against his rule.

The Brotherhood described it as an attack on peaceful protesters. Police sources said hundreds of Mursi supporters clashed with local residents, street vendors and others near the sit-in. They said gunshots were fired and stones were thrown.At least 15 burned-out cars lay abandoned around the Cairo University area where the clashes took place. Splattered blood and broken glass disfigured the pavements near the shopping area where a traffic police station was set on fire.

Brotherhood members with sticks guarded the entrance to the protest site after the clashes calmed, while residents stopped cars on the road to Cairo University to check for weapons.Calls for Mursi to be released have been issued by the US, Germany, the UN and the EU which, on Monday, again called for the leader to be freed.“It is now of utmost importance that Egypt embarks on a transition, allowing a transfer of power to a civilian-led and democratically elected government,” EU foreign ministers said in a statement. – ArabNews