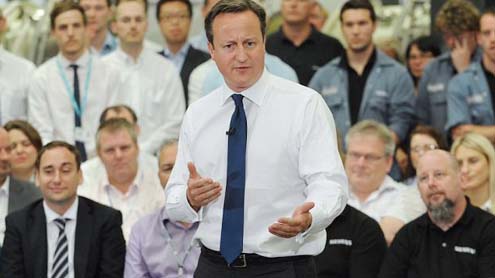 David Cameron spent thousands of pounds of public money on a 140-mile helicopter flight to Lincoln instead of taking a car or train.

The Prime Minister snubbed public transport and travelled by military aircraft to attend a question-and-answer session with factory workers.Last night green campaigners said there was ‘no justification’ for using a helicopter for such a short journey.It is believed that the flight by RAF helicopter was only a little more than an hour faster than taking a train.On Tuesday, Mr Cameron was driven to RAF Northolt, near Uxbridge, West London, in his ministerial car, a journey of around 35 minutes.

He was then flown by military helicopter to RAF Waddington, near Lincoln – a flight of less than an hour – where he was met by another car to take the 13-minute journey to a Siemens factory.A similar train journey from London to Lincoln, changing at Newark North Gate, takes around two hours and costs £67, or around £120 for a first-class ticket.It is not known how much using the RAF helicopter would have cost, but it is likely to have been several thousand pounds.Following the question-and-answer session, Mr Cameron was asked how he travelled to Lincoln, where travellers have long complained of poor rail links.

He said: ‘Today, I’ve been flying around, but I use trains, cars, boats, planes, helicopters – all manner of means. But I know here in Lincoln you want to see more direct services. There’s the one but we need more.’Natalie Bennett, the leader of the Green Party, said: ‘Clearly, he should have taken a train for environmental reasons. It’s an immense sum of money.’Steve McCabe, Labour MP for Birmingham Selly Oak, said: ‘People stuck on trains and in traffic queues in the sweltering heat will be appalled to find out that David Cameron was spending thousands of pounds of their money on a helicopter to ferry him to a publicity stunt.

‘Once again it just shows just how out of touch the Tories are.’Mr Cameron’s spokesman said: ‘The Prime Minister will use the most appropriate form of travel.’Asked why an RAF helicopter was deemed to be the most appropriate mode of transport on this occasion, he replied: ‘Because it was. I’m not a travel agent.‘The Prime Minister travels in a range of different means, of course dependent on the event he is going to. We publish the costs of ministerial travel. Everything is as cost-effective as possible.’

Asked if he had travelled by helicopter to avoid sitting on a hot train, the spokesman said: ‘I didn’t have a thermometer.’Former deputy prime minister John Prescott made fun of the flight on Twitter, despite the fact that he was once flown by helicopter to a Grand Prix at Silverstone, paid for by the Motorsports Association.Mr Prescott, who also took his chauffeur-driven car the short distance from a Bournemouth hotel to the Labour Party conference, tweeted a link to a train ticket website yesterday, saying: ‘David Cameron, you really should try this. It’s amazeballs.’ – DailyMail