Heat blankets much of US as summer sizzles 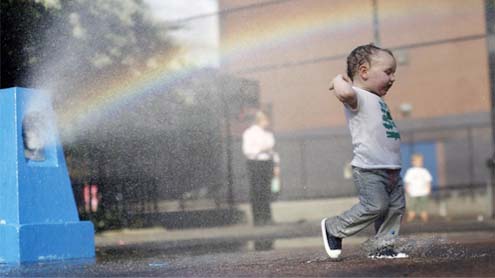 Heat blankets much of US as summer sizzles

NEW YORK: From Minnesota to Massachusetts temperatures surged to potentially dangerous levels Wednesday as the largest heat wave of the summer stretched out and stagnated, with relief in many parts of the country still days away.

Most states in the U.S. were expected to have some areas where the temperature would hit 90 degrees or more, according to the National Weather Service. Humid air just made it all feel worse, with heat indexes in some places over 100. Parts of 19 states were under weather advisories.In New York City, where it was 95 degrees, sidewalk food vendor Ahmad Qayumi said that by 11 a.m., the cramped space inside his steel-walled cart got so hot, he had to turn off his grill and coffee machine.

“It was just too hot. I couldn’t breathe,” he said, turning away a customer who asked for a hamburger. “Just cold drinks,” he said.Amid the heat, officials in Washington D.C.’s Maryland suburbs worked to keep a failing water main from cutting off hundreds of thousands of people, just when they needed it most. People in Prince George’s County were asked not to run their faucets, water their lawns or flush toilets to keep the water system from emptying during emergency repairs.

Firefighters in southern California faced brutally hot — but dangerously dry — conditions as they battled a wildfire outside Palm Springs. Temperatures could go as high as 105 and humidity could go as low as 1 percent by the afternoon, said Tina Rose, a spokesman for the California Department of Forestry and Fire Protection. The fire has already consumed seven homes.At the World Trade Center reconstruction site in New York City, workers building a rail hub dripped under their hardhats, thick gloves and heavy-duty boots. Some wore towels around their necks to wipe away the sweat.

“We’re drinking a lot of water, down under by the tracks, in and out of the sun all day — very hot,” said carpenter Elizabeth Fontanez, of the Bronx, who labored with 20 pounds of tools and safety equipment strapped to her waist. Since the heat wave began, she said she has been changing shirts several times during her shifts.Officials blamed hot weather for at least one death. A 78-year-old Alzheimer’s patient died of heat exhaustion after wandering away from his northern Kentucky home Tuesday in temperatures that rose to 93 degrees.Limited relief, in the form of a cold front, was expected to begin dropping south from Canada starting Thursday, before sweeping through the Midwest and into the Mid-Atlantic and Northeast regions by Saturday. That will bring lower temperatures, but also possibly severe thunderstorms, Vaccaro said. – YahooNews