TV anchor Laurie Dhue opens up about struggle with alcoholism 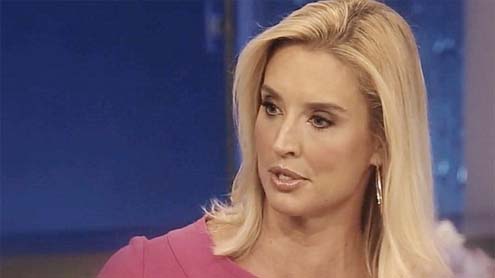 TV anchor Laurie Dhue opens up about struggle with alcoholism

For 15 years news anchor Laurie Dhue, one of the most recognizable faces on television, hid her alcoholism from friends, family and colleagues.

Despite the demands of her job, Dhue managed to hide her crippling addition and admitted that although she was always sober in front of the camera, she was drunk when she was invited to meet President Bush at a small reception.The 44-year-old went on the Katie Couric Show today to discuss her addiction and to encourage others to get treatment. After seeking help for her alcoholism six years ago the news anchor, who worked for Fox News, MSNBC and CNN, now tries to raise awareness about the dangers of drinking.

‘People, when they first heard I was an alcoholic, were really shocked’ Dhue said, adding that she had become a master at leading a double life.’I don’t know how I kept it going as long as I did … I had no control over what I was doing. I had an impetuous attitude to it,’ she said, adding that she felt she deserved to be able to drink because she had a successful career.Dhue, whose battle with alcoholism was revealed after a reporter wrote about a talk she had given at a private prayer meeting in 2011, has been sober since March 14, 2006.

The only anchor to have worked on all three major networks told Couric she was never drunk in front of the camera, but conceded that ‘what you were getting was a hungover person’.She added that she had a few drinks to boost her confidence when she was invited to a private reception to meet President W Bush.’I was fairly drunk when I met President Bush. I was invited to a small reception but before I met him I had a few pops in my room. I couldn’t do it without a drink,’ she said.

Just after her secret was revealed, Dhue admitted: ‘I would drag myself into work deeply hung over. I thought I had to drink myself into oblivion several times a week. I suffered in silence. I lived in constant fear. On the inside, I was dying.’Her appearance on the Katie Couric Show came as the show’s host examined the effects of women drinking.Drinking has become an alarming trend among women, Couric said, with 5.3 million in the U.S. drinking in a dangerous way.The TV host said many popular series glamorized drinking and she highlighted a Gallup poll that showed two thirds of women admitted to drinking regularly.

She claimed that when women sought help, they were sometimes preyed upon by men in the self-help meetings, an experience Dhue also admitted to suffering.’I was definitely preyed upon at first and made a mistake by dating a person in the program,’ she said, warning other women to avoid dating anyone for the first six to 12 months of recovery.She told Couric she finally sought help six years ago, when her sister was expecting her first child. She was working for Fox at the time and has spoken previously of how supportive her co-workers and employers were.

‘I got in a drunken fight with a friend, made a blackout call to a boyfriend I was seeing at the time, that I don’t remember making, and my sister was having a baby. I didn’t want that unborn baby to see me drunk,’ she said. ‘My nephew Robert saved my life.’Dhue, who is dating Joe Schrank, the co-founder of the Rebound Brooklyn program who has been in recovery for more than 16 years, said there was hope for women in her position.’Recovery is possible, it works,’ she told Couric. ‘There is hope out there and you are not alone.

The couple are fostering a 14-year-old Kenyan schoolboy who earned a scholarship for the U.S. but needed a family to care for him for four years. Mr Schrank also has an adopted son, Paolo, ‘Andrew is such a joy, such a gift. He is only in our lives because we are sober,’ she said. ‘People in recovery are much more likely to make good decisions, decisions that can have a positive ripple effect in the community at large. Our lives have meaning and purpose. We are less selfish.’ – DailyMail