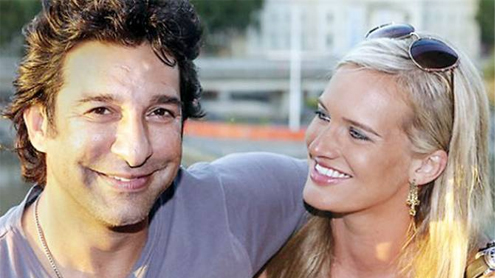 “Yes, Wasim and Shaniera are engaged; they are getting married at the year-end. I wish them good luck,” said the source.Wasim’s first wife, Huma, died on October 25, 2009 at Apollo Hospital in Chennai state of India. They got married in 1995, and had a son, Taimoor, in 1996 and another son, Akbar, in 2000. Huma died 15 years after marriage.Wasim met with Shaniera in Melbourne in 2011 for the first time. He said he was happy he had found love. “I never thought I would get married again, but I am lucky and very happy to find love again,” he said. “It just goes to show that life can give you a second chance.”

The dashing legend remained in news with celebrated beauties since the death of his wife. The most notable of them was about him and Indian diva Sushmita Sen. But later they both dismissed it as a rumour and dubbed it as rubbish.Sen clarified they had been good friends and nothing more than that. Wasim also made similar statements, adding he wanted to devote himself to his children and was not planning to marry for the time being.

Afterwards, Wasim was linked with 23-year-old model-turned-actor Humaima Malik who claimed she had a close relation with Wasim. In fact, she was widely acknowledged as the legendary cricketer’s new girlfriend.“I am not dating any 23-year-old Pakistani model. My life is only devoted to my two kids,” Wasim was quoted as having said, refuting the claims made by Humaima Malik. After the death of Huma, Wasim shifted to Karachi from Lahore. His sons are currently getting education from schools in Karachi.

Pakistan cricket great Wasim Akram is engaged to marry Melbourne woman Shaniera Thompson, reported The Australian on Sunday.The famed left-arm bowler, 47, proposed on bended knee in their lounge room to Ms Thompson, 30. “It was the romantic moment of my life because it was so genuine,” she said.A former public relations consultant from Brighton, Ms Thompson has converted to Islam, and will call Pakistan home. She said Wasim Akram was nervous about proposing in the traditional way. “He was really sweet about it.

He asked me what my dream proposal would be and I said I’m not the type of woman that likes a big scene. I would want it to be at home or somewhere private. “Then I came into the lounge room and he was on his knee and asked me if I’d marry him.”But the joyful mood was soon broken by a worried look on Thompson’s face. She told Akram: “If we are doing this the traditional way, then you have to ask my father.”He called Ms Thompson’s father, who gave his blessing. The pair met in Melbourne in 2011 and Akram said he was happy he had found love. “I never thought I would get married again, but I am lucky and very happy to find love again,” he said. “It just goes to show that life can give you a second chance.” – TheNation

80 rounded up in Lahore blast probe