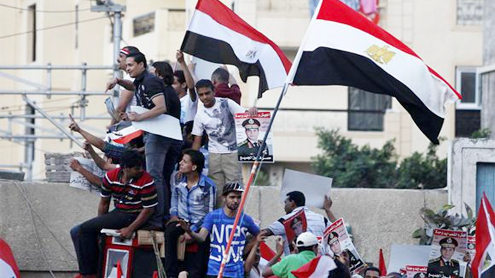 Egypt’s military, which overthrew elected leader President Mohamed Mursi on Wednesday, can ill afford a lengthy political vacuum at a time of violent upheaval and economic stagnation in the Arab world’s largest nation of 84 million people.Scenes of running street battles between pro- and anti-Mursi demonstrators in Cairo, Alexandria and cities across the country have alarmed Egypt’s allies, including key aid donors the United States and Europe, and Israel, with which Egypt has had a US-backed peace treaty since 1979.

At least 35 people died in violence on Friday and Saturday in fresh turmoil that came two and a half years after autocratic ruler Hosni Mubarak was toppled in a 2011 uprising.While Sunday was calmer, the sight of huge crowds numbering hundreds of thousands gathering in different parts of Cairo was a reminder of the risks of further instability.The transitional administration, installed by the army to steer Egypt to fresh elections, put forward two possible liberal-minded choices for the key position of interim prime minister over the weekend.

On both occasions the Nour Party said no.Nour had signed up to the army’s roadmap for the political transition, giving Islamist legitimacy to an audacious overthrow rejected by Islamic parties aligned to Mursi’s Muslim Brotherhood.That has given it leverage over the choice of the next prime minister. But already accused by other Islamists of betraying their cause, Nour must tread carefully to avoid losing support among its core constituency.
Unlike Nour, its bigger rival the Brotherhood has said it would have no part in the military-backed political process.

Thousands of its supporters are camped out in a suburb of northeastern Cairo. They are refusing to budge until their leader is restored — an unlikely outcome.Others, like 55-year-old Hanim Ahmad Ali Al-Sawi, were waiting outside the Republican Guard barracks where Mursi was being held.“We will not leave until Mursi returns. Otherwise we’ll die as martyrs,” she said, as soldiers and policemen looked on from behind barbed wire. She had been there with her five children for the last three days in spite of the scorching heat.

For many Islamists, the overthrow of Egypt’s first freely elected president was a bitter reversal that raised fears of a return to the suppression they endured for decades under autocratic rulers like Mubarak.On the other side of the political divide, hundreds of thousands of Mursi’s opponents poured into Cairo’s Tahrir Square, the cradle of the popular uprising to oust him.On Sunday night, a carnival atmosphere took hold, and a troupe of folk musicians played darabukka drums and mizmar flutes as others danced and let off fireworks.“I came out to protest today because we reject the terror of the Brotherhood,” said Mohamed Manndouh, a 21-year-old business studies student, reflecting the mood among many across Egypt who backed the military intervention.

The army has denied it staged a coup, saying instead it was merely enforcing the will of the people after mass protests on June 30 calling for Mursi’s resignation.People blamed the Brotherhood for economic stagnation and trying to take over every part of the state, an accusation the movement stringently denies.Washington has not condemned the military takeover or called it a coup, prompting suspicion within the Brotherhood that it tacitly supports the overthrow.

Obama has ordered a review to determine whether annual US assistance of $1.5 billion, most of which goes to the Egyptian military, should be cut off as required by law if a country’s military ousts a democratically elected leader.But US lawmakers said that was unlikely to happen.“We should continue to support the military, the one stabilizing force in Egypt that I think can temper down the political feuding,” US Representative Mike Rogers said on CNN’s “State of the Union.”

Egypt can ill afford to lose foreign aid. The country appears headed for a looming funding crunch unless it can quickly access money from overseas. The local currency has lost 11 percent of its value since late last year.The governor of Egypt’s central bank, Hisham Ramez, flew to Abu Dhabi on Sunday, officials at Cairo airport said, following Egyptian media reports Cairo was seeking financial aid from Gulf states after Mursi’s removal.Egypt’s foreign reserves fell $1.12 billion in June to $14.92 billion, representing less than three months of imports.Only about half are in the form of cash or in securities that can easily be spent, and the IMF considers three months to be the minimum safe cushion for reserves. – ArabNews