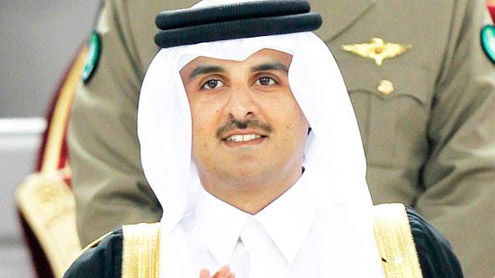 DOHA: Qatar’s new emir yesterday said his country seeks strong ties with “all governments” in his first speech since taking power, as he swept aside the prime minister who had served his father before him.

Sheikh Tamim bin Hamad Al-Thani, in a short televised address to the nation, said Qatar “rejects divisions in Arab societies on sectarian lines,” in reference to Sunni-Shiite tensions convulsing the region.“We seek to preserve relations with all governments and countries and we respect all sincere, active and effective political directions in the region but we do not support one side over the other,” said the 33-year-old emir.Sheikh Tamim came to power after his father Sheikh Hamad bin Khalifa Al-Thani abdicated in his favor on Tuesday, becoming the youngest Gulf Arab ruler.

The director of the influential Al-Jazeera television network, Ahmed bin Jassim Al-Thani, was appointed minister of economy and trade.Sheikh Ahmed, a member of the ruling family, announced his resignation as Al-Jazeera head, a post he had held for two years, in a statement just minutes before the new Cabinet was announced.The historic transition of power from father to son in a region where autocrats cling to power for decades was widely welcomed by the Qatari press as “a first and unprecedented” decision.

The change is not expected to affect the general policies of US-ally Qatar, which has solidly backed the Arab Spring uprisings.“There will be no substantive change in Qatar’s foreign policy,” says Ibrahim Sharqieh, deputy director of the Brookings Doha Center. “Sheikh Tamim is the product of his father’s political process, which has continued since his accession to power in 1995.”

The departure of the flamboyant Sheikh Hamad, known for his controversial personality as chief diplomat since 1992, “will certainly result in a change in style but not substance,” said Sharqieh.Among Arab leaders who jetted to Doha yesterday to congratulate the new emir were Saudi Arabia’s second Deputy Premier Prince Muqrin bin Abdul Aziz, Kuwaiti Emir Sheikh Sabah Al-Ahmad Al-Sabah, Jordan’s King Abdullah II, as well the crown princes of Bahrain and Abu Dhabi.US Secretary of State John Kerry, traveling in the region, too extended his greetings. – ArabNews