DOMA defeated on historic day for gay rights in US 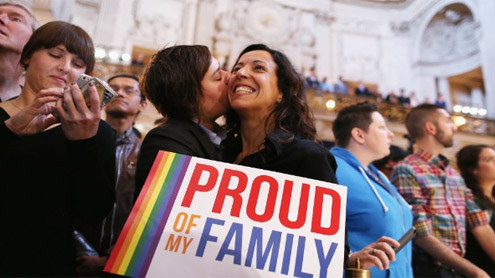 DOMA defeated on historic day for gay rights in US

Supreme Court rules Defense of Marriage Act to be unconstitutional and clear way for same-sex marriage to be restored in California.

A landmark supreme court ruling struck down a controversial federal law that discriminated against gay couples in the US, delivering a stunning victory on Wednesday to campaigners who fought for years to overturn it.The court also dismissed a separate appeal against same-sex marriage laws in California, restoring the right to gay marriage in the largest US state and nearly doubling the number of Americans living in states where gay marriage would be legal.

Together, the two rulings mark the biggest advance in civil liberties for gay people in a generation, and come amid growing political and international recognition that same-sex couples deserve equal legal treatment.As reporters sprinted from the chamber down the court steps to deliver the news of the rulings, a roar built up from the crowd that had been waiting outside since the night before.

The most significant legal breakthrough came in the decision led by Justice Anthony Kennedy to rule that the Defense of Marriage Act (Doma) was unconstitutional because it deprived citizens of “equal liberty” before the law.

Doma, signed into law by President Clinton in 1996, previously barred married gay couples from a range of crucial legal rights including federal tax and estate tax exemptions, social security benefits, and the right to be notified of the death of next of kin. It also meant that the married partners of gay Americans were not recognised under the immigration system, leading to heartbreaking splits for couples of different nationalities.

But in a case brought by an 84-year-old resident of New York, Edith Windsor, who faced a $313,000 estate tax bill after the death of her partner of 40 years, lawyers successfully argued that Doma was an unconstitutional interference by Congress in the rights of states to determine marriage laws.”Domainstructs all federal officials, and indeed all persons with whom same-sex couples interact, including their own children, that their marriage is less worthy than the marriages of others,” said the opinion, written by Kennedy and supported by a total of five of the nine court justices.

“The federal statute is invalid, for no legitimate purpose overcomes the purpose and effect to disparage and to injure those whom the state, by its marriage laws, sought to protect in personhood and dignity. By seeking to displace this protection and treating those persons as living in marriages less respected than others, the federal statute is in violation of the fifth amendment.”The significance of the argument signed by Kennedy and four other justices goes beyond one law. By declaring that gay people are deserving of equal protection under the constitution, it makes it more difficult to pass discriminatory laws in the future.

Antonin Scalia, the arch-conservative justice, led a blistering dissent. He callled the decision on Doma and the technical ruling that the court had jurisdiction over such matters “jaw-dropping”. Reading from the bench, he said: “Both spring from the same diseased root: an exalted notion of the role of this court in American democratic society.”

But the justices’ majority decisions were greeted with jubilation among gay rights campaigners. President Obama called the Doma ruling a “historic step forward for marriage equality” and said he had ordered government departments to implement it as quickly as possible.”I’ve directed the attorney general to work with other members of my cabinet to review all relevant federal statutes to ensure this decision, including its implications for federal benefits and obligations, is implemented swiftly and smoothly,” he said.

Chuck Hagel, the defense secretary, said benefits would extended to the spouses of all servicemen and women, regardless of sexual orientation.James Esseks of the American Civil Liberties Union said: “This historic ruling recognizes how unfair it is to treat married lesbian and gay couples as though they’re legal strangers. Edie and Thea were there for each other in sickness and in health like any other married couple. It’s only right for the federal government to recognize their marriage and the life they built together.” – Guardian