Deadly attack in Kashmir ahead of India PM trip 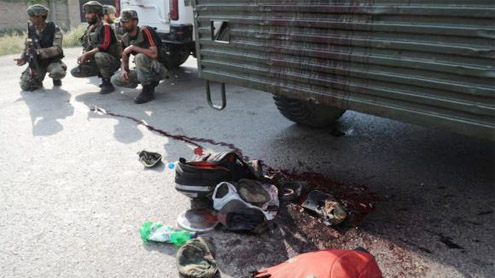 Deadly attack in Kashmir ahead of India PM trip

SRINAGAR: Three soldiers were killed and seven others were wounded Monday in an attack on a convoy in Indian Kashmir on the eve of a visit by Prime Minister Manmohan Singh, the army said.

The soldiers were attacked when militants opened fire on their convoy on the outskirts of Srinagar, the main city in Indian-controlled Kashmir, army spokesman Col. Brijesh Pandey said.“We have received 10 casualties from the attack site at the military hospital, three of them were fatal,” he said.The attack came amid a high state of alert which had been imposed ahead of Singh’s arrival today for a two-day visit to the territory, his first since June 2010.

Security officials had earlier said that police and paramilitary forces were being deployed in strength across the region and additional check points had been erected along major highways.“A high alert is there. We do face a threat from the militants,” Abdul Gani Mir, Kashmir’s police chief, said.Kashmir, a picturesque Himalayan territory, is divided between India and Pakistan by a UN monitored de facto border known as the Line of Control (LOC) but it is claimed in full by both.

More than a dozen armed rebel groups have been fighting Indian forces since 1989 for the region’s independence or its merger with Pakistan.Tens of thousands of people, mostly civilians have died in the fighting but armed violence has been on a steady decline since the early 2000s.Security concerns were further raised on Saturday when armed rebels struck in a busy commercial area in the heart of Srinagar, the region’s summer capital, killing two policemen in a shoot-and-run incident.

The three main separatist groups opposed to Indian rule have called for a total shutdown for today to protest the prime minister’s visit.“This is a protest against the forcible military occupation of Kashmir and we want to give the Indian prime minister this message that by hanging Afzal Guru, New Delhi has sent the entire Kashmiri people to the cross,” Syed Ali Geelani, a top separatist leader said in statement.

Mohammad Afzal Guru, a Kashmiri Muslim was secretly executed and buried inside a high security prison in New Delhi in February for his role in a deadly attack on India’s parliament in 2001.Four people were killed during a security crackdown against widespread protests over the hanging of Guru, whom many people in Kashmir believe was framed.Singh, who will be accompanied to Kashmir by the president of the ruling Congress party Sonia Gandhi, is scheduled to inaugurate a section of an ambitious railway project that is expected to link the land-locked Kashmir valley to the massive Indian rail network by 2018.