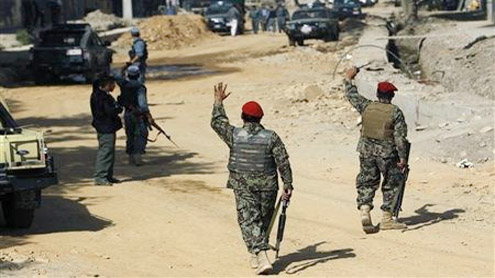 Afghan authorities say security forces have repelled an early morning millitant attack on the presidential palace in Kabul and that all of the assailants have been killed.

The Taliban claimed responsibilty for the early Tuesday morning assault, during which explosions and gunfire rang out in a heavily fortified area of the capital that also houses the defense ministry and the  U.S. Embassy.  Officials say the assault in Kabul came as reporters were gathering for a press event with Afghan President Hamid Karzai.

The whereabouts of Mr. Karzai, who lives in the building, were not immediately clear.Tuesday’s attack came during a visit to Kabul by U.S. envoy James Dobbins who has been appointed to help the Afghan government and the Taliban pursue peace talks.The talks to end 12 years of war between the Taliban and the international and Afghan forces ran into difficulties over the opening last week of a Taliban office in the Gulf emirate of Qatar.

Mr. Karzai’s objections to the Taliban’s Doha office focused in part on the way the Taliban unveiled the office earlier in the week.The group raised a flag and posting a sign identifying the facility as an office of “the Islamic Emirate of Afghanistan” – the name used by the Taliban group that formerly controlled Afghanistan but was deposed in late 2001. The “Islamic Emirate” was never recognized internationally as a government.Officials say a substitute sign was posted identifying the Doha facility as the “Political Office of the Afghan Taliban.” – VOA

Kerry: Lives May be Lost Due to Snowden’s Betrayal

Kerry: Lives May be Lost Due to Snowden's Betrayal