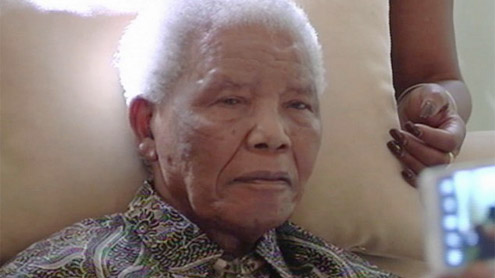 Nelson Mandela is unresponsive and his immediate family is now discussing whether to withdraw treatment, it has been claimed.

The 94-year-old has been in hospital for two weeks battling a recurring lung infection, but previous statements have indicated that Mr Mandela’s health is improving.According to a new source, Mr Mandela’s liver and kidney functions are down to 50 per cent and he has not opened his eyes for days.He has also had two recent procedures, one to repair a bleeding ulcer and another to insert a tube into his body, CBS News reports.

This information indicates that Mr Mandela’s situation is much more much more serious than has been reported by South African authorities.In an interview last week, South African president Jacob Zuma said Mr Mandela was responding better to treatment.Marking the 49th anniversary of the sentencing of the former president to life in prison in 1964, last Wednesday Mr Zuma said: ‘We are very happy with the progress that he is now making following a difficult last few days.’

Following the interview with the ANC leader, a government spokesman told local radio that Mr Mandela remained in a ‘serious but stable’ condition.As recent as Thursday, one of Nelson Mandela’s grandsons said he hoped Mandela would be discharged shortly as his health was improving.‘Positively we can say that he has been getting better and better each day and hopefully he’ll be coming home soon,’ Ndaba Mandela told South African newspaper The Star.

However, details about the night Mr Mandela arrived in hospital two weeks ago have emerged.According to CBS News, Mr Mandela went into cardiac arrest the night he was taken to Pretoria Hospital and had to be resuscitated.As Mr Mandela was driven to the hospital the ambulance suffered an engine failure and was forced to wait for over 40 minutes for a replacement.When the second ambulance arrived Mr Mandela had to be transferred – in winter temperatures- to a second vehicle which could have had an impact on his condition, according to a cardiologist interviewed by CBS.

South African government officials have said ‘great care was taken to ensure that Mandela’s health was not compromised and that his doctors were satisfied the former president suffered no harm.’Mandela, who turns 95 next month, is being treated at a Pretoria hospital for a recurring lung infection.The hospital stay is his fourth since December and there is a growing realisation among South Africa’s 53million people that they will one day have to say goodbye to the father of the ‘Rainbow Nation’ that Mandela tried to forge from the ashes of apartheid. – DailyMail