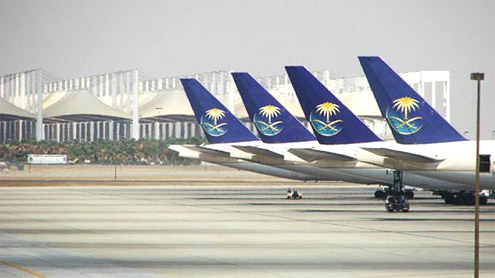 One million extra seats are needed on domestic flights to meet demand in summer, according to travel and tourism experts.

Khaled Al-Aboud, CEO of a travel agency, said the absence of an effective inter-city rail network and other modes of public transport system have compounded the problem during peak periods.“We have a crisis during the summer months when travel and tourism flow doubles. We need at least a million additional seats in the air travel sector to cope with the demand in the domestic sector,” he said.Lauding Saudi Arabian Airlines’ efforts to increase the number of domestic flights, he said this reflects the Council of Ministers’ desire to initiate measures to cope with the travel crisis during the summer season. He said this would help people who want to travel before Ramadan.

Al-Aboud said there are now 1,428 flights a week, with 169,000 seats. He was hopeful, however, that by the year-end, the crisis would be resolved with the entry of Qatar Airways and Gulf Air with 20 additional aircraft.He said passengers sometimes cannot get flights to small towns for 10 days. He urged the authorities to find innovative solutions for the problem.Khaled Biwazir, CEO of another travel agency, believes that the aviation sector should use small Brazilian aircraft to fly to small cities and increase domestic flights to Riyadh, Jeddah and Dammam. – ArabNews

Taliban Step Toward Afghan Peace Talks Is Hailed by US