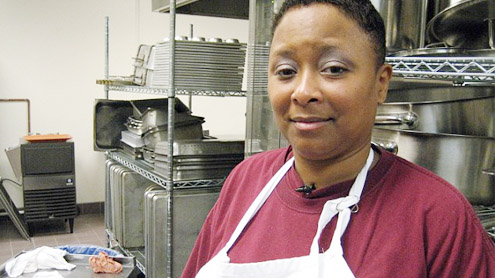 An Indiana woman who was sentenced to die at age 16 for the brutal murder of an elderly Bible school teacher will be released from prison on Monday after 28 years behind bars.

Paula Cooper was just 15 in May 1985 when she and two other teenage girls entered 78-year-old Ruth Pelke’s home in Gary, Indiana, by telling her they wanted to study the scripture. Once inside, they viciously attacked the frail woman.Cooper, now age 43, is being released because the Indiana Supreme Court commuted her sentence to 60 years in prison in 1988.

In prison, she received a bachelor’s degree a went on to train companion dogs for the disabled and serve as a counselor to other inmates at Rockville Correctional Facility – Indiana’s largest women’s prison.Her prison record shows 23 violations, though only minors infractions since 1995 when she was sentenced to solitary confinement for assaulting a guard.

She told the Indianapolis Star in a 2004 interview that she feels remorse for the killings.’Everybody has a responsibility to do right or wrong, and if you do wrong, you should be punished,’ she said. ‘Rehabilitation comes from you. If you’re not ready to be rehabilitated, you won’t be.’Bill Pelke, Ruth Pelke’s grandson, said he has befriended Cooper in the nearly three decades she has been in prison and forgives her for her crime.’My main concern is seeing her get settled and find a job,’ he told the Star.

The crime horrified Indiana. Cooper admitted to the murder, but prosecutors pushed for the death penalty, arguing the crime was unspeakably vicious and pre-planned.Investigators found she stabbed Pelke 30 times with a kitchen knife as the elderly woman lay on the floor. One of the thrusts was so hard, it passed through Pelke’s body and damaged the wood floorboards. In 1986, at age 16, she was sentenced to die by Lake County Judge James Kimbrough. At the time, state law allowed for the execution of anyone age 10 and over who was convicted of capital murder.

She was the youngest person on death row in the country.The sentence sparked and uproar from anti-death penalty campaigners around the world. Letters flooded the state General Assembly, the prosecutor’s office and the Indiana Supreme Court.Pope John Paul II himself pleaded for clemency for Cooper and sent an emissary to visit the prosecutors and beg not to condemn the girl.

Cooper spent less than two years on death row, by 1988 the U.S. Supreme Court ruled minors couldn’t be executed for any crime that happened before age 16. In 2005, a new court ruling raised the age to 18.The Indiana Supreme Court commuted her sentence to 60 years in prison that year. By  2002, the state raised the minimum age for execution to 18.Cooper is being released after 28 years, thanks to an Indiana law that allows a day’s credit for every day served and other credits for educational achievements and good behavior.