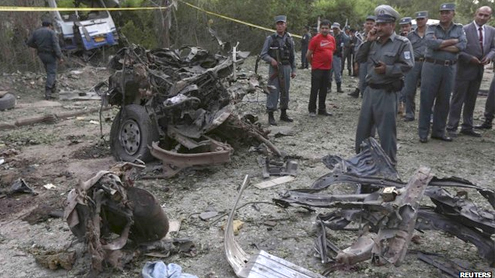 A suicide bomb attack in Kabul has killed at least 16 people and injured more than 40 others outside the Supreme Court, Afghan police say.

The attacker drove a car packed with explosives at buses that were carrying court staff, including judges.In a statement sent to the BBC, the Taliban said they carried out the attack, saying it had killed judges who “obey Western powers”.It is the second big attack in Kabul carried out by the group in two days.On Monday, seven insurgents, including suicide bombers, laid siege to the main airport for four hours before they were killed.The Taliban appear to be demonstrating that they can still hit high-profile targets in the city, despite a heightened alert in the run-up to a handover of full security control to the Afghan government next month.

Tuesday’s attack also underlines the Taliban’s readiness to target civilians, particularly court officials, whom they consider an arm of the Western-backed government of President Hamid Karzai.The Supreme Court building is a few hundred metres from the entrance to the US Embassy.Nato’s headquarters are also nearby.The explosion happened at the height of Kabul’s evening rush hour.The BBC’s David Loyn, in Kabul, said many of those injured by the blast were inhabitants of the tightly packed housing estate close by who were hit by flying glass.Parts of the city’s diplomatic area have since been cordoned off. – BBC