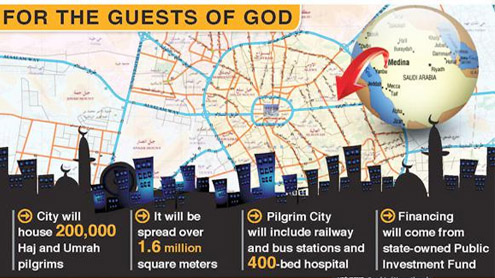 A state-of-the-art pilgrim city will be established in Madinah on an area of 1.6 million square meters along Hijrah Road with modern facilities and public transport systems to house 200,000 faithful who come for Haj and Umrah.

“Custodian of the Two Holy Mosques King Abdullah has instructed the Finance Ministry to implement the project,” said Madinah Gov. Prince Faisal bin Salman, adding that it would boost pilgrim services in the city.State-owned Public Investment Fund will finance the project, which is located close to the Prophet’s Mosque, he said. It includes a railway and bus station, offices of government agencies and a 400-bed hospital.

A number of hotels and furnished apartments will be constructed as part of the world-class city to accommodate 200,000 pilgrims, said Prince Faisal while thanking King Abdullah for approving the vital project.Saudis and expatriates have applauded the project, saying it opens a new era in pilgrim services. “This is a brilliant project,” said Mohammed Badahdah, assistant secretary-general of the World Assembly of Muslim Youth. He urged authorities to make special arrangements at the new city for Islamic education of pilgrims.

Speaking to Arab News, he said: “Such a city was required as the buildings surrounding the Prophet’s Mosque will not be able to house the growing number of pilgrims.” He said he hoped there would be a transport system to commute pilgrims between the city and the holy mosque.Badahdah said rooms in the city should be made available at affordable prices. He said five-star hotels in Makkah and Madinah should not charge pilgrims high prices as they do not provide them with same services of their counterparts in other places.

Abdulelah Saaty, dean of the College of Business in Rabigh, said the project reflected the government’s desire to improve services being rendered to the guests of God. “It goes well with the ongoing expansion projects for the two holy mosques,” he told Arab News. “Madinah needs such a project due to increasing number of pilgrims,” he said while stressing the need to carry out the project based on international standards. – ArabNews