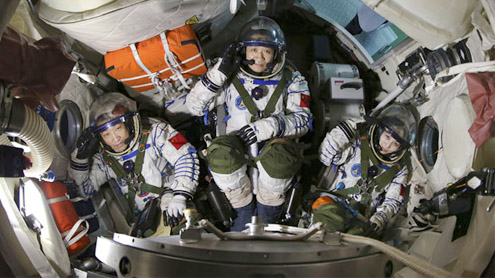 Jiuquan, China: The first thing I noticed were the bicycles. Those who weren’t riding them were walking.I was beginning to wonder if we’d taken a wrong turn. We were looking for China’s super-secret space center.

If this really was the epicenter of China’s space race, then why did it feel so relaxed?A few hours later I’d be in a room crammed with TV cameras and reporters where the atmosphere was electric in a weird sci-fi way. But at that moment on those narrow scrubbed and manicured streets it felt almost like a vacation town.Tiny restaurants pulsed bright inviting neon lights at us as we drove by. Even the small stores had a come hither and loiter awhile holiday village quality to them.

Our hotel when we arrived was so new gardeners were still planting the flower beds, and builders’ white sheets covered the new red carpet.Sadly, in this town that claims to offer the ultimate in uplift, space rockets, the elevator was not working. The porters however were only too happy to help.

Indeed, that seems to sum up Jiuquan space center as the town is known; its easy charm and friendliness. It’s not until you rub shoulders with the town’s power brokers that you see sense the purpose of this place.In one of the low rise buildings, barely visible from the road behind rows of trees I met one such person. Rather I saw her, than actually met her. In a conference room crowded with journalists she strode in on a mission.No sense of holiday about her, she oozes work. As deputy director of the space mission that means she has the hopes of the nation riding on her shoulders. Little wonder everyone in the room paid attention to her words.

Every question that came about the imminent launch of China’s next manned mission to space she answered in precise, accurate and minute detail. Well, almost every question. For no matter how much I waved my hand and waited my turn, it never came.Space race.I suppose, after all, this is a Chinese event and why would they want to answer a question from the only Western reporter they’d invited to the launch? But space race, yes, I caught a whiff of it right there.

Before the Long March 2F rocket topped by the Shenzhou 10 space capsule does take off on Tuesday, I am told I will get the launch pad. No doubt I’ll catch an urgency right there.China has taken great strides since its first manned space mission 10 years ago but it still lags the U.S. and Europe who share the permanently manned international space station.Everyone will be wishing the Chinese mission luck as they thrust into the skies on the quest to help future generations.

The blue spacesuited heroes I saw will spend 15 days orbiting the earth after docking with their own unmanned space station. While by comparison, Russia’s Soyuz craft docks with the International Space Station just six hours after liftoff, the Chinese will take two days from takeoff to docking.But six hours or two days; it doesn’t really matter. China is in space and the people of this town fully understand what that achievement means. – CNN