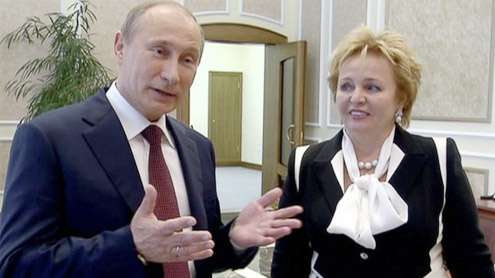 Russian President Vladimir Putin and his wife Lyudmila have said their marriage is over.

The couple, who had been married for 30 years, made their divorce public on Russian state television after attending a ballet performance.”It was a joint decision: we hardly see each other, each of us has our own life”, Mr Putin said.Mrs Putin had rarely been seen in public in recent months, prompting much speculation in Russian media.She is known to dislike publicity, and told the TV reporter that flying was difficult for her. “Vladimir Vladimirovich is completely drowned in work,” she said.

The divorce was “civilised” and the couple would “always remain close”, she said.”I am very grateful to Vladimir… that he still supports me. And the children, he really cares for them and the children feel this,” she added.Mr Putin confirmed on TV that the two were no longer living together.”We are always going to be very close to each other. I am sure, forever,” he said.Vladimir Putin and Lyudmila Shkrebneva were married in 1983. They have two daughters, Maria and Yekaterina, both in their 20s.

“Our children have grown up; they have their own lives,” Mrs Putin added.She and Mr Putin were last seen together at his inauguration for his third term as president on 7 May 2012.Remarriage?Neither clarified whether or not their marriage had been legally dissolved, but Mrs Putin referred to the separation as a “civilised divorce”.The announcement came after the couple had gone to see the ballet Esmeralda at the Kremlin Palace – they left after the first act.

The BBC’s Steve Rosenberg in Moscow says that Thursday’s announcement confirms what had been rumoured for years, that the Putins were having marital problems.But the news has still come as a shock to many Russians, who are not used to their leaders getting divorced – even though Russia has one of the highest divorce rates in the world, our correspondent adds.The question already dominating the Russian blogosphere is, “will Russia’s president marry again?”, he says.The Putins’ marriage had been the subject of speculation before.In 2008, Mr Putin denied rumours that he had secretly divorced and was planning to marry former Olympic gymnast Alina Kabayeva. – BBC