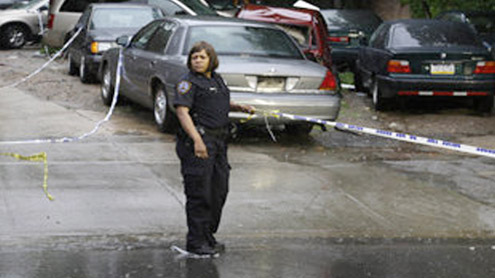 When a gunman opened fire Sunday night on Kelly Street in the Bronx, 15-year-old Sarah Rivera put herself in harm’s way to save a toddler who had been left in a stroller on the street.

While several adults ran from the scene, River dashed for the child. She was hit in the leg by a stray bullet while pushing the child to safety.“I thought I was going to die,” Sarah told the New York Daily News. “I fell to the ground.”Doctors expect Sarah to make a full recovery, but the circumstances of the shooting are disturbingly familiar. Over the weekend, New York City witnessed 25 shootings, resulting in six fatalities. On Sunday alone, three people were killed and eight others wounded by gunfire from Brooklyn to the Bronx.

The rash of weekend shootings comes against a backdrop of major gun control efforts by both New York City and state officials. Mayor Michael Bloomberg has emerged as one of the nation’s strongest advocates for stricter firearm regulations, and has long touted the city’s strict gun control rules as helping to bring about a significant drop in crime over the last decade. (The mayor’s office declined to comment on the weekend’s shootings.)

New York recently became the first state to pass major gun control legislation since the Dec. 14 shootings in Newtown, Conn. The bill that Gov. Andrew Cuomo signed into law in January both strengthens the state’s existing assault weapons ban and introduces new mental health regulations for potential gun owners.None of that did much to help Sarah, a seventh-grader at Middle School 302 in the Bronx and one of three girls to be caught in the line of fire over the last few weeks.

On May 18, D’aja Robinson, 14, was shot and killed on her way to a Sweet 16 party when a gunman fired off nine rounds into the side of a Queens bus.Last Friday, 11-year-old Tayloni Mazyck was shot by a stray bullet outside her apartment in Brooklyn’s Bedford-Stuyvesant neighborhood when a teenage boy opened fire on rival gang members. Tayloni, who survived the gunshot, lost feeling in her legs and may never walk again.“We should have more gun control,” Sarah’s mother, Jacqueline Franco, told the Daily News. “I wish they could just make guns extinct, period.”

While the weekend’s heinous gun violence might suggest the ineffectiveness of such measures, this year’s numbers are notably better than the last. According to the Daily News, the 440 shootings so far this year represent a 23 percent drop from the 574 victims in 2012.And while some have described this weekend’s figures as “Chicago-like,” the Windy City still leads the Big Apple in gun violence. Chicago, a city with just one-third of New York’s population, witnessed over 500 homicides last year compared with New York’s 414. This weekend, Chicago saw 12 people wounded by shootings and one fatality. – YahooNews

Iraq: Israel can’t use our airspace for striking Iran