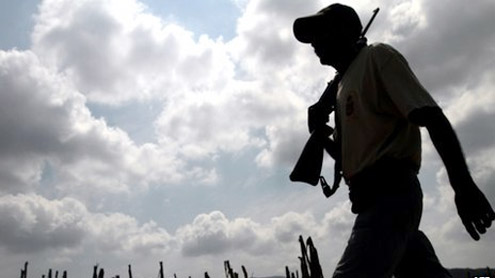 Police in Mexico say they have found the bodies of three left-wing activists who went missing on Thursday after a protest in support of local farmers.

Five others are still missing. The bodies were found by the roadside in southern Guerrero state.Two bodies had bullet wounds, while the third victim seems to have been beaten to death.Mexican police say it is not clear whether the activists have been killed for their political work.They may have become the latest victims of drug cartels operating in the region.Among the dead is the local leader of the Party of the Democratic Revolution (PRD), Arturo Hernandez Cardona.

Mr Cardona, a well-known politician in Guerrero state, was also a leader of the Emiliano Zapata Peasants’ Union (Ucez).Fellow PRD activist Angel Aguirre Rivero said he did not believe that rival politicians were responsibie for the deaths, but called for a thorough investigation.”We live in different political times. Our party cannot accuse anyone. All we need is that those behind these deaths be punished,” he told La Jornada newspaper.Mr Aguirre Rivero believes the militants were killed by common criminals.

“I believe this is the result of the violence the whole country is going through,” he said.The bodies of the three activists were found outside the city of Iguala, which is inland from the popular resort of Acapulco.About 70,000 people are estimated to have died in drug-related violence in Mexico over the past six years.President Enrique Pena Nieto has made the fight against organised crime one of his main priorities and has announced the creation of a new federal police force to help drive down murder rates.Guerrero state has been particularly badly hit by the drug-cartel violence.In response to the growing criminality, vigilante groups have been formed.The “self-defence groups” accuse the authorities of failing to provide security for ordinary citizens in the region. – BBC