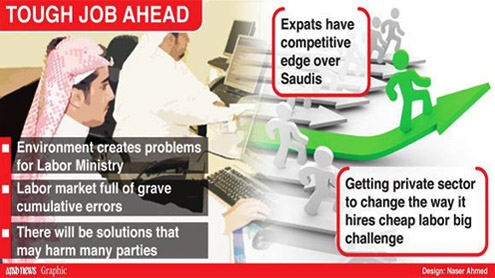 More than 600,000 jobs have been nationalized under Nitaqat initiative.This was revealed yesterday by Labor Minister Adel Fakeih at a Jeddah social dialogue workshop on policies and wage levels in the private sector.

Deputy Labor Minister Ahmad Al-Humaidan said the ministry is disappointed with the wage level of Saudi workers in the private sector.He said the ministry is working on the question of raising wages. But, he added, the authorities are doing this within the framework of a social dialogue with the business sector.

He said there is a need to find a mechanism to improve the wage structure.Fakeih said the minimum wage issue is under review. He added that examples from the experience of other Arab countries that have been using such a system would be studied.He said the ministry would study where it is best applied, and on what professions, and in what sectors, and then the ministry would opt for the option that maximizes Saudi employment and minimizes expat labor.He also said that ministry prefers to base its decisions on dialogue.He explained that in addition to dialogue, the ministry would follow another method, the details of which would be announced in due time.

The penultimate drafts of the minister’s decisions will be posted online for feedback.The market is suffering from grave cumulative errors that give expats a competitive edge over Saudis, creating an environment that makes it impossible for the ministry to solve the problems on its own, officials at the workshop said. – ArabNews

Obama: Gov’t with Oklahoma ‘every step’ of the way