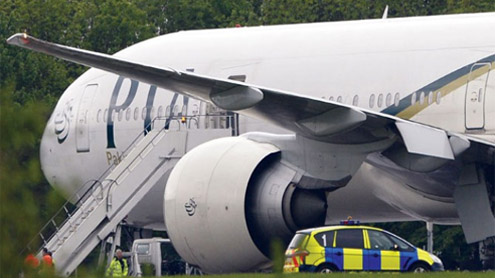 LAHORE/LONDON: British police arrested two men on a Pakistan International Airlines plane after fighter jets were scrambled to escort it to a London airport on Friday following an “incident”.

Police said the men were detained on suspicion of endangering an aircraft after the plane, which was carrying 300 passengers from the city of Lahore to Manchester in northwest England, was diverted to Stansted airport outside London.”Two men have been arrested on suspicion of endangerment of an aircraft,” police in Essex said in a statement. “They are aged 30 and 41 and are being taken to a police station for interview by detectives.”The incident was not believed to be terrorism-related. An airline source told AFP the incident had stemmed from a family row on board.

“There was a family of eight to 10 people on the plane and they were quarrelling among each other,” the PIA source said.”When PIA staff approached them and asked them to calm down, they told them to go away otherwise they would blow up the plane.”PIA staff became scared and they raised the alarm to avoid any untoward situation.”A spokesman for the Ministry of Defence said that Typhoon jets had been launched from a Royal Air Force base after the incident was signalled by the plane’s crew, shortly before the plane was due to land in Manchester at 1230 GMT.

“Typhoon aircraft from RAF Coningsby have been launched to investigate an incident involving an aircraft in UK airspace,” the MoD spokesman said.After the plane landed, the MoD spokesman said the incident was now a police matter and “our involvement is over”.Typhoon planes can be scrambled if the pilot or crew of a passenger aircraft sends out a passenger signal, he added.”The purpose of going up is to investigate what the situation is,” he said.”Often when a Quick Reaction Alert aircraft is launched the details are not known, but it is known that a signal has been sent.”

By strange coincidence, the PIA plane diverted to Stansted was the very same plane on the very same route — Lahore to Manchester — that was diverted to Stansted in September 2011 due to a bomb scare.A senior PIA officer, seeking anonymity, said the pilots – Nadeem Soofi and Rashid – could have handled the situation in a better way.He said SOPs (standard operating procedures) are followed to tackle such unruly passengers.

As per SOP, a pilot conveys a message to the control tower that there are some unruly passengers and requests the airport authorities for police on arrival. Under the British laws, creating a trouble during a flight is a major and non-bailable offence, entailing 3 to 6 months’ imprisonment. Due to negligence of the pilots, PIA would have to face a huge loss by making landing at two airports.

The story also created hype for the country and the airlines, said another officer.A senior purser of the airlines, on condition of anonymity, said that on the Lahore-Manchester flight most of the passengers belonged to Mirpur and Mangla and a scuffle among them was a routine matter. It was all due to the mismanagement of the pilots as the message was passed on only 20 to 30 minutes before landing at the Manchester airport.However, a PIA spokesman said the flight was diverted to Stansted as a safety measure.

The flight PK 709, Boeing 777 aircraft carrying 297 passengers and 11 crew members, landed safely at the Stansted airport. He said that the PK 709 flight in the UK airspace was diverted to Stansted airport on receiving a message of threat to the aircraft from two passengers.UK police will conduct forensic examination of the threatening passengers before deciding about registering a case against them, a late night report said. – Dawn