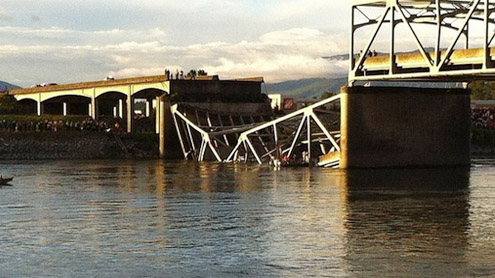 Part of a road bridge has collapsed into the Skagit River in the US state of Washington.Vehicles and people were thrown into the water after a section of the Interstate 5 highway collapsed at about 19:00 local time (02:00 GMT).

State officials said three people were rescued and there were no fatalities.The four-lane bridge is near Mount Vernon, about half way between the state’s main city Seattle and the Canadian city of Vancouver.The cause of the collapse is not yet clear.Images showed a section of the bridge in the river with cars partly submerged. In one image taken shortly after the collapse a person was seen sitting on top of a car.

A rescue operation swung into action with rescue boats searching for people in the river.Helicopter footage showed divers at the scene with several ambulances waiting on the riverbank. Floodlights were brought in as darkness fell.One rescue boat left the scene with one person strapped into a stretcher.Marcus Deyerin, spokesman for the Northwest Washington Incident Management Team, said three people had been rescued and sent to area hospitals. He didn’t know the extent of their injuries.

The Skagit Valley Herald quoted a driver who said he felt a vibration as he crossed the bridge and looked in his rear-view mirror to see that a section was no longer there.Traffic was backed up on both sides of the river and crowds of people lined the riverbank to watch the scene unfold. – BBC

Tags: Skagit River in the US