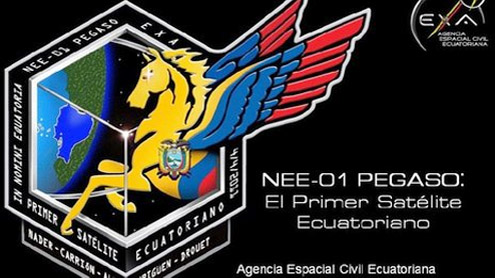 The Ecuadorean space agency (EXA) is trying to pick up signals from its satellite after it crashed in space into debris from an old rocket.

The nano-satellite, called Pegasus, was launched from the Jiuquan spaceport in China less than a month ago.It is Ecuador’s first and only satellite in orbit.Experts said Pegasus had collided with debris from a Soviet rocket but was still in orbit. It is not yet clear if it has been damaged.The US-based Joint Space Operations Center, which monitors all artificial Earth-orbiting objects, said there had been no direct crash but that their “data indicated a lateral collision with particles” of the Soviet rocket.

EXA chief Ronnie Nader tweeted that Pegasus remained in orbit. “Ecuador still has its satellite, the people still have Pegasus,” he announced.”Pegasus could be damaged or spinning out of control, but because it’s still in orbit, we have hope,” he wrote.He had said earlier that it could take up to 48 hours to ascertain possible damage using radar.
Debris threatPegasus, a small cube weighing just 1.2kg (2.6lb), has been orbiting the Earth at a height of 650km (404 miles), transmitting pictures from space while playing recordings of the Ecuadorean national anthem.

On Wednesday, the Joint Space Operations Center notified EXA of a possible collision between Pegasus and the fuel tank of an S14 Soviet rocket over the Indian Ocean, some 1,500km east of Madagascar.Mr Nader said the satellite was insured.The Ecuadorean government contributed $700,000 (£465,000) to its launch on board an unmanned rocket.Ecuador is planning to launch a second satellite, named Kryasor, from Russia in August.The Joint Space Operations Center tracks more than 22,000 objects orbiting Earth, of which 87% are debris and inactive satellites. – BBC