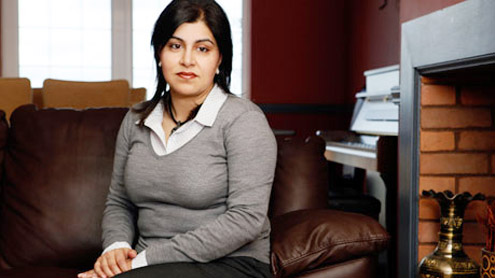 TV stations should not give airtime to preachers of hate who are ‘idiots and nutters’, a leading minister said last night.

Baroness Warsi spoke out amid a growing furore at Westminster about the amount of coverage given to Anjem Choudary and other militant Islamists on the BBC, ITV and Channel 4 News.The BBC in particular – who have released footage of  Michael Adebolajo standing behind Choudary at a 2007 demonstration – came under fire for offering the hate-filled radical a slot on last night’s Newsnight programme on BBC2.he decision was branded ‘idiotic’, ‘irresponsible’ and ‘insensitive’.

Baroness Warsi said: ‘We all have a responsibility, including the media, not to give airtime to extremist voices – idiots and nutters who speak for no one but themselves.‘The heartening thing in the midst of all this tragedy is that the British Muslim community has, with a unified, unreserved voice, condemned the killing and pledged support for our armed forces.‘This is a real maturing of the community which has taken years of painstaking work and frank discussions behind closed doors.

‘This time everyone has stepped up to the mark. Yet here broadcasters are undoing all this by giving a platform to one appalling man who represents nobody. I am really angry.’Choudary, former head of banned Islamist organisation Al Muhajiroun, was behind the planned protest march in 2010 through Royal Wootton Bassett, the town where dead British soldiers were repatriated.He has been accused of radicalising Adebolajo – the blood-soaked man who was filmed in the aftermath of the horrific attack berating the British government – in the mid-2000s.Defence Secretary Jim Murphy said on Twitter: ‘Banned from France but welcome on Newsnight. A mistake of the BBC to invite Anjem Choudary onto the telly tonight.’

Sadiq Khan, Labour’s Shadow Justice Secretary, also condemned the BBC’s decision, telling LBC radio that the radical was an ‘offensive and obnoxious media tart’ with no followers.Choudary also appeared on the BBC’s rolling news channel and has been on ITV News.Yesterday it also emerged that Choudary and another radical Islamist, who both knew one of the alleged Woolwich terrorists, had separately been given a platform to air their own militant views by Channel 4.Both Abu Nusaybah and Choudary admitted they knew ‘Mujaahid’ – who has been identified as Adebolajo.

The pair were given their own slot on the broadcaster’s 4thought.tv, a two-minute opinion show that airs immediately after its nightly news bulletin.The decision by the broadcaster to hand over its airwaves to both men had sparked anger from moderate Muslims.Both men had been previously given slots on the channel in 2010 to talk about sharia law.According to Channel 4’s website, Nusaybah told the programme that Britain would be a safer place if it adhered to sharia law. A BBC spokesman said it would not comment on guests for its programme.

A Channel 4 spokesman said: ‘4thought.tv includes contributions from a broad spectrum of religions and beliefs and of those Muslims featuring on the slot the vast majority would describe themselves as moderate.’Humza Yusaf, the Scottish Government’s minister for external affairs, tweeted: ‘I really hope media are sensible and do not give the horrendous Anjem Choudary a minute of publicity to promote his vile hatred.’ – DailyMail