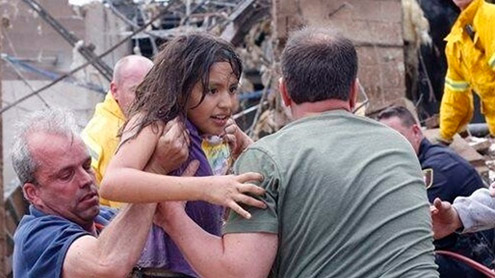 It was the end of the school day. The kids at Plaza Towers Elementary School were stuffing their backpacks, looking forward to going home, playing with friends, eating snacks.

But the tornado warnings changed that.When the twister came barreling in Monday afternoon, terrified young students huddled together in the hallways, screaming as walls and roofs caved in. Chairs and backpacks swirled above them. The winds and blaring sounds enveloped them. Cars from the parking lot landed just inches away.Teachers dove onto groups of kids to protect them from falling debris.It was the biggest tornado they’d ever seen. Described as a lawn-mower blade spanning two miles, it shredded through their town.

A snapshot of courage after tornado levels school.”It was scary,” student Julio Rodriguez told CNN. Teachers instructed the kids to crouch down, “and you covered your head with your hands,” he demonstrated.”I had to hold on to the wall to keep myself safe because I didn’t want to fly away in the tornado,” one little girl told KFOR.The 17 mile-long twister stayed on the ground for 40 minutes.By the time it was gone, so was the school in Moore, Oklahoma. In its place was a huge pile of rubble, trapping teachers and children.

How to help.And seven students were dead.”Some of the children drowned because they were in the basement area, water came in,” Lt. Gov. Todd Lamb told CNN.The school quickly became the epicenter of the tragedy in this shattered town, part of the metropolitan Oklahoma City area.’I love you,’ teacher tells students.’We had to pull a car off a teacher’.First responders and volunteers rushed to the scene to begin the treacherous work of searching for survivors.

“We had to pull a car off a teacher and she had three little kids underneath her,” one first responder, in tears, told KFOR. “Good job, teach.””I was on top of six kids,” one sixth grade teacher said, working her way across the rubble. “I was lying on top. All of mine are OK.”Teachers helped tear through several feet of rubble to rescue sobbing students, some of them injured.Rescue teams successfully pulled several kids from the leveled school.But with each passing hour, the hope began to fade.

Crews continued their search around the clock, rummaging through nearly 40 feet of rubble, CNN affiliate KOKH reported.Some students were fortunate — they got out of the school before the tornado struck.Officials had managed to bus some children to a nearby church, which turned out to be clear of the tornado’s direct path, KFOR reported.After the tornado, terrified parents hurried to get as close to the school as the devastation allowed. They had been helpless during the twister, unable to get to their kids, desperate. They were sent to the church to begin what would be a horrible wait.

The devastation is palpable throughout Moore.”We have not yet reached the coping state,” a first responder named Wes told CNN iReport Tuesday “We still have not processed what has happened.”Disaster sparks call for shelters.Even so, the horror has already sparked calls for changes in Oklahoma schools.While Plaza Towers Elementary apparently did have a basement, it did not have a storm shelter.”Most of the schools in Oklahoma don’t have one” because of the cost, Moore Mayor Glenn Lewis told CNN.

But he said he’s sure that will change now.Schools that rebuilt after a massive tornado in 1999 do have storm shelters, he said.Oklahoma state Rep. Mark McBride called for legislation next year. “The children are sacred. We need to protect these kids,” he said.The state is so used to having tornadoes that people “get lax” and think “it’s not a big deal,” he said.Now, McBride added, “it’s got to change.” – CNN