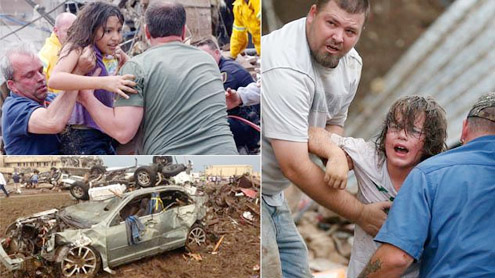 A devastating, two-mile-wide tornado touched down near Oklahoma City on Monday, killing at least 51 people—including at least 20 children—decimating homes, businesses and a pair of elementary schools in the suburb of Moore.

According to the state’s medical examiner, the death toll was expected to rise.The schools—Plaza Towers Elementary and Briarwood Elementary—were leveled by the tornado. It was unclear how many children were in them at the time the twister hit, but according to KFOR-TV, at least seven children died at Plaza Towers, and as many as two dozen more were feared to be trapped inside the rubble. An Associated Press photographer saw rescue workers pull several children out alive. A makeshift triage center was set up in the school’s parking lot.

“This is war-zone terrible,” Jon Welsh, a helicopter pilot for KFOR who lives in Moore, said while surveying the damage from the air. “This school is completely gone.”Emergency officials urged people to remain off the roads so rescue workers and first responders could reach people potentially trapped in rubble, as the National Guard was called in to help in the search for victims.

Three people were killed at a 7-Eleven in the path of the storm, CBS’ KWTV reported, including a man, woman and baby who took cover in a freezer but didn’t survive. KFOR reported a fourth person was killed there.”Our hearts are broken,” Oklahoma Gov. Mary Fallin said at a news conference Monday evening.The tornado left a debris field 20 miles long and several miles wide. According to the National Weather Service in Norman, Okla., the tornado was on the ground for approximately 40 minutes, and a tornado warning was in effect for 16 minutes before the twister developed.

Weather officials estimated the strength of the storm to be an F4 or F5 on the Fujita Scale—the highest rating a tornado can achieve. The National Weather Service said the tornado’s preliminary classification was an F4, with winds up to 200 mph.On May 3, 1999, a tornado outbreak near Oklahoma City produced 14 tornadoes—including an F5 in Moore—killing 36 people and injuring 295 others. A host on KFOR called Monday’s storm “the worst tornado damage-wise in the history of the world.”The devastated area was an estimated 30 square miles.

“The whole city looks like a debris field,” Moore Mayor Glenn Lewis said on NBC’s “Nightly News.” “Our hospital is pretty much destroyed.”Communication was snarled as landlines and cellphone towers were knocked down. A water treatment plant in Oklahoma City was also damaged.President Barack Obama directed the Federal Emergency Management Agency to prepare to get “all available assistance” to the disaster-hit area.Families of potential victims were directed by the Red Cross to a website—safeandwell.org—for information about survivors.The 106-acre Orr Family Farm, a popular attraction in town, was extremely damaged, its owner said. KFOR reported between 75 and 100 horses perished there.

Another, smaller tornado was spotted on the ground west of Meeker, Okla., north of Shawnee, on Monday.The Oklahoma House of Representatives canceled its afternoon sessions so lawmakers and staffers could take shelter, the AP said.The tornadoes came a day after powerful storms ripped through the center of the country, spawning at least a dozen tornadoes, killing two people and causing extensive damage from Georgia to Minnesota. – YahooNews