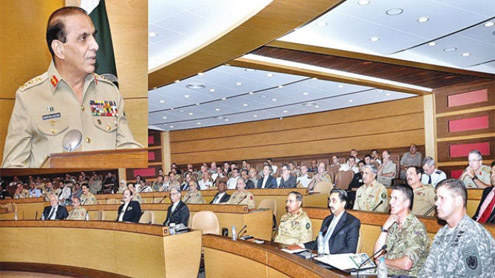 Pakistan’s military chief has recommended setting up an internationally-supported regional military forum against the growing threat of improvised explosive devices (IEDs) as representatives from over two dozen states showed up at an international event here on Monday to join hands against the use of the homemade bomb.

“I would like to propose formation of a regional military C-IED (counter- improvised explosive device) forum supported by a wider international forum to benefit from experiences of all countries involved. I am hopeful that this proposal will receive serious consideration from the participants and their countries,” said Chief of Army Staff General Ashfaq Parvez Kayani while addressing the moot participants.

The symposium envisaging cooperation on C-IEDs was attended by the military men and defence experts from 28 countries including theUnited States, the United Kingdom,France,Germany,Australia,Canada,China,RussiaandAfghanistan.Since last year, this was the fourth meet-up involvingPakistan’s direct participation in the efforts on countering the IED threat.During a meeting of the Tripartite Commission Working Group’s Sub-Committee on the C-IEDs held here in January this year, the military commanders from Pakistan, Afghanistan and the (International Security Assistance Force) had pledged to continue cooperation against the IED threat prevalent across the Pak-Afghan border.

“The threat and impact of these weapons is not Pakistan-specific. The IEDs have caused devastation at both regional and global levels. These have been used with unfortunate consistency in Iraq and Afghanistan and thankfully, somewhat inconsistently, in other countries of the world. The recent Boston bombings involving use of homemade IED manifests the international dimension of this threat and serves as a stark reminder that even the most developed nations of the world remain vulnerable to this threat,” General Kayani said.Elaborating on the specifications, he appeared to have impliedly defending Pakistan’s excessive reliance of Calcium Ammonium Nitrate (CAN) in the agriculture sector, adding that five percent of the fertilisers used in the country’s agricultural sector were made of CAN.

“Production of CAN has come under national and international focus, to the extent of creating a perception that controlling CAN alone, can remove the menace of IEDs and our arguments against that perception were almost taken as unwillingness to act against the IEDs. However, CAN is only one of the precursor of IEDs. There are dozens others which remain readily available. Moreover, Pakistan is not the only country producing CAN. Other countries in the region also produce CAN which has a higher degree of nitrogen content than what Pakistani CAN possesses,” the general added.

He linked the success of efforts on C-IEDs to “adopting a focused and multi-layered approach, improving upon the ability to work with partners around the globe and at all levels of government as well as the private sector.”On Pakistan’s efforts against the IEDs, the COAS said, “Contrary to prevalent perceptions, Pakistan has come a long way in fighting this menace over the past two-three years. Pakistan has taken significant policy initiatives to counter the IED threat. Pakistan Army, aware of the seriousness of the threat, is leading the drive to create a pragmatic, cost-effective and efficient C-IED strategy.”

Praising Pakistani public role and resolve against terrorism, Kayani spoke high of his compatriots. “As a nation we are peace-loving people. Overwhelming majority of our people is moderate, resilient and extraordinarily hardworking. In the recently conducted general elections, we have amply demonstrated that as a nation we can withstand any challenge. In these elections, people of Pakistan not only courageously withstood the threat of terrorism; they also defied unfounded dictates of an insignificant and misguided minority. As a nation, our commitment to moderation, prosperity and rule of law is total and unwavering. We have the resolve and a firm belief to overcome the challenges towards attainment of these goals.” – Nation