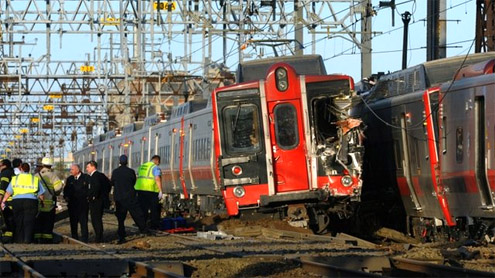 About 60 people have been injured, five critically, after a head-on, rush-hour collision between two commuter trains near New York City, officials say.

Some 250 people were on the trains involved in Friday evening’s crash. No fatalities have been reported.Officials said a train that left New York City’s Grand Central station en route to New Haven, Connecticut, derailed then was hit by another train.Amtrak has suspended its service between New York and Boston.Metro-North Railroad described it as a “major derailment”, just outside Bridgeport, Connecticut.

Connecticut Governor Dannel Malloy said the front of one of the trains had been extensively damaged and its wheels were “sticking into the other train”.One of the five people with the most serious injuries was described as being in a “very critical” condition.Investigators are trying to find out what caused the crash, which came shortly after 18:00 local time (22:00 GMT).Gov Malloy said he had no reason to believe it was anything other than an accident.

Bridgeport Police Chief Joseph Gaudett said most of those hurt were walking wounded.”Everybody seemed pretty calm,” he told the Associated Press. “Everybody was thankful they didn’t get seriously hurt. They were anxious to get home to their families.”But Canadian passenger Alex Cohen told NBC Connecticut that “people were screaming… they had to smash a window to get us out”.One witness, Brian Alvarez, told CNN: “I saw this one car and it was completely destroyed and they were pulling people out of the car. They were all bloody.” – BBC