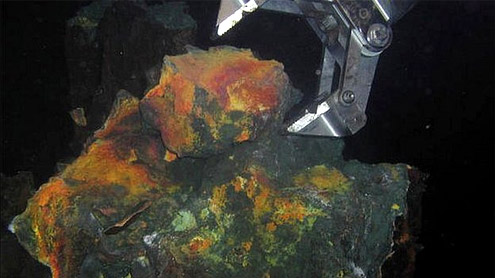 The prospect of a deep sea “gold rush” opening a controversial new frontier for mining on the ocean floor has moved a step closer.

The United Nations has published its first plan for managing the extraction of so-called “nodules” – small mineral-rich rocks – from the seabed.A technical study was carried out by the UN’s International Seabed Authority – the body overseeing deep sea mining.It says companies could apply for licences from as soon as 2016. The idea of exploiting the gold, copper, manganese, cobalt and other metals of the ocean floor has been considered for decades but only recently became feasible with high commodity prices and new technology.

Conservation experts have long warned that mining the seabed will be highly destructive and could have disastrous long-term consequences for marine life.The ISA study itself recognizes that mining will cause “inevitable environmental damage”.But the report comes amid what a spokesman describes as “an unprecedented surge” of interest from state-owned and private mining companies.The number of licences issued to prospect for minerals now stands at 17 with another seven due to be granted and more are likely to follow. They cover vast areas of the Pacific, Atlantic and Indian oceans.

One of the most recent to be granted was to UK Seabed Resources, a subsidiary of the British arm of Lockheed Martin, the American defence giant.Under the UN Convention on the Law of the Sea, the ISA was set up to encourage and manage seabed mining for the wider benefit of humanity – with a share of any profits going to developing countries. Now the ISA is taking the significant step of moving from simply handling bids for mineral exploration to considering how to license the first real mining operations and how to share the proceeds.

The ISA’s legal counsel, Michael Lodge, told the BBC: “We are at the threshold of a new era of deep seabed mining”.The lure is obvious: an assessment of the eastern Pacific – a 5 million sq km area known as the Clarion-Clipperton Zone – concluded that more than 27 billion tonnes of nodules could be lying on the sand.Those rocks would contain a staggering 7 billion tonnes of manganese, 340 million tonnes of nickel, 290 million tonnes of copper and 78 million tonnes of cobalt – although it’s not known how much of this is accessible.A map shows the spread of licensed areas across the zone.According to the planning study, the ISA faces the challenge of trying to ensure that nodule mining’s benefits will reach beyond the companies themselves while also fostering commercially viable operations.

The plan relies on providing operators with the right incentives to risk what would be expensive investments without losing the chance for developing countries to get a slice of the proceeds.But the ISA identifies what it calls a “Catch-22″ in this brand new industry as it tries to assess which companies are skilled enough to carry out the work.”Competence cannot be gained,” it says, “without actual mining at a commercial scale, but at the same time mining should not be allowed without prior demonstration of competence.”

A key factor in the ISA’s thinking is the need for environmental safeguards, so the document calls for monitoring of the seabed during any mining operation – though critics wonder if activity in the ocean depths can be policed.The prospect of deepsea mining has already sparked a vigorous debate among marine scientists, as I found earlier this year on a visit to the British research ship, James Cook, exploring the hydrothermal vents of the Cayman Trough.The expedition’s chief scientist, Dr Jon Copley, a biologist from the University of Southampton, urged caution:

“I don’t think we own the deep ocean in the sense that we can do what we like with it,” he said. “Instead we share responsibility for its stewardship.”We don’t have a good track record of achieving balance anywhere else – think of the buffalo and the rainforest – so the question is, can we get it right?”And Professor Paul Tyler, also a biologist, of the National Oceanography Centre, warned that unique species would be at risk.”If you wipe out that area by mining, those animals have to do one of two things: they disperse and colonise another hydrothermal vent somewhere or they die.

“And what happens when they die is that the vent will become biologically extinct.”However, Professor Rachel Mills of the University of Southampton, a marine chemist, called for a wider debate about mining generally on the grounds that we all use minerals and that mines on land are far larger than any would be on the seabed.She has carried out research for Nautilus Minerals, a Canadian firm planning to mine hydrothermal vents off Papua New Guinea.”Everything we are surrounded by, the way we live, relies on mineral resources and we don’t often ask where they come from.