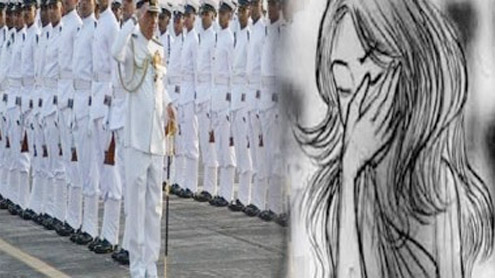 New Delhi: Barely a month after wife-swapping-nights scandal in the Indian navy, a naval officer’s wife has now accused her husband of forcing her to have sex with his colleagues, Indian media reported on Wednesday.

In the latest case, the wife of a lieutenant commander (equivalent to the rank of an army major) has complained to Indian defence minister AK Antony that her husband forced her to consume alcohol and get “sexually involved” with fellow officers. Antony ordered a probe against the officer posted at the Naval Ship Repair Yard (NSRY) at Karwar in Karnataka.

The latest controversy erupted on a day Antony told top naval commanders to take “sternest possible action” against officers tarnishing the image of the navy.The woman is understood to have alleged that her husband threatened to upload her nude photographs on the internet to ruin her social image if she complained to anyone. The woman has left her husband and moved in with her parents.

However, navy sources said the woman had made no mention of these allegations in a letter, dated April 26, to the naval headquarters. A source said she had only levelled allegations of harassment and sought divorce.”The new allegations appear to be an afterthought to sensationalise a case of marital discord,” he said. There have been a string of such cases in the navy lately.

In early April, the lieutenant’s wife had alleged that wife-swapping was prevalent in the navy and she was molested by her husband’s superiors. Since the changes made by the lady were of a serious nature, Antony immediately ordered the navy to submit a report.The navy had then too claimed that it was a case of marital discord going horribly wrong.Two naval officers were dismissed last month — a commander (lieutenant colonel-equivalent) for sending lewd texts to women and a lieutenant commander (major-rank equivalent) for entering into an illicit relationship with the wife of a superior.

Two years back, Antony had sacked a commodore (brigadier-equivalent) for having sexual relations with a Russian woman in Moscow.Commodore Sukhjinder Singh was posted in Moscow from 2005 to 2007 as the Indian warship production superintendent to oversee aircraft carrier Gorshkov’s refit when he developed the illicit relationship. – OnlineNews