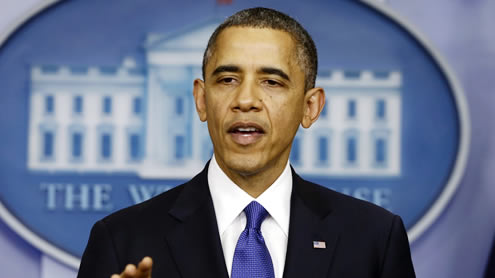 WASHINGTON: Congratulating the Pakistani people on successful completion of Saturday’s parliamentary election, President Barack Obama Sunday said his administration looks forward to working with the government emerging from the historic polls “as equal partners” in supporting a more stable Pakistan.

The United States and Pakistan have a long history of working together on mutual interests, and my Administration looks forward to continuing our cooperation with the Pakistani government that emerges from this election as equal partners in supporting a more stable, secure, and prosperous future for the people of Pakistan,” Obama said.

The U.S. president’s statement came after Saturday’s nationwide polls, which saw Pakistan Muslim League (N) led by former prime minister Nawaz Sharif emerge as the largest party in the Parliament with over 120 seats. Sharif is poised to form a new government in Islamabad in upcoming weeks. Obama said in the White House statement: “I congratulate the people of Pakistan on the successful completion of yesterday’s parliamentary elections.”

The United States, he said: “Stands with all Pakistanis in welcoming this historic peaceful and transparent transfer of civilian power, which is a significant milestone in Pakistan’s democratic progress.” Obama particularly praised the Pakistanis for exercising their democratic right to vote and persevering with democratic process in the face of intimidation by violent extremists. “By conducting competitive campaigns, freely exercising your democratic rights, and persevering despite intimidation by violent extremists, you have affirmed a commitment to democratic rule that will be critical to achieving peace and prosperity for all Pakistanis for years to come,” he added.

Meanwhile, in a separate message, Secretary of State John Kerry also echoed Washington’s desire to work cooperatively with the new government to advance shared interest. He said the national and provincial assembly elections mark an historic step in Pakistan’s democratic journey. “The Pakistani people stood up resiliently to threats by violent extremists,” Kerry noted in a statement released by the State Department. “We’ll be working with the new government to advance shared interests including a peaceful, more prosperous and stable future for Pakistan and the region.” – APP