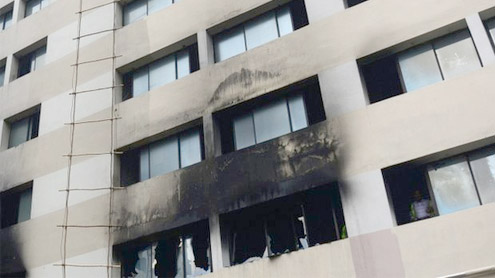 A fire in a garment factory in the Bangladesh capital, Dhaka, has killed at least eight people, police say.

Officials said the blaze took place overnight in the Mirpur industrial district.It comes with the issue of industrial safety in Bangladesh under intense scrutiny following the collapse of an eight-storey building late last month.On Thursday officials confirmed that at least 912 people had died in the disaster.Reports suggested that a police officer and the owner of the factory were amongst the eight killed in Wednesday’s blaze.They were believed to be holding a meeting in the 11-storey building, which belongs to garment exporter Tung Hai Group, when the fire broke out.

“It was a big fire but we managed to confine it on one floor,” Mahbubur Rahman, operations director of Bangladesh’s fire service, told news agency AFP.The victims had suffocated after becoming overwhelmed by “toxic smoke from burnt acrylic clothing”, he said.Fire officials said it took around two hours to tame the fire.Most of the workers had already gone home when the blaze started, reports said.”It is not clear to us how the accident happened, but we are trying to find out the cause,” Mohammad Atiqul Islam, president of the Bangladesh Garment Manufacturers and Exporters Association, told Reuters news agency.

Two weeks ago Bangladesh was hit by its biggest industrial disaster, with the collapse of the Rana Plaza building on 24 April – which has sparked outrage among workers.The search for bodies is continuing at the factory complex, which was home to several garment factories.Officials say about 2,500 people were injured in the collapse and that 2,437 people were rescued.On Wednesday, Bangladesh announced a shut down of 18 garment factories for safety reasons.

“We have seen that those who claim to be the best compliant factories in Bangladesh have not fully abided by building regulations,” Bangladesh’s textile minister, Abdul Latif Siddique, told reporters.Bangladesh has one of the largest garment industries in the world, and some of the clothes produced in the Rana Plaza building were made for Western retailers.The industry employs about four million people and makes up almost 80% of the country’s annual exports. However, it has faced criticism over low pay and for the often dangerous working conditions in factories. – BBC